Most of us in IT have spent decades explaining that a server isn’t just a big PC. Although this is immediately obvious to us, it’s kind of hard to put your finger on exactly when a PC becomes a server and what differentiates one from another. After all, they all use the same Intel Xeon or AMD Epyc CPUs, which means they have similar configuration and capabilities. There are a pile of form factors these days, from “twins” to “pizza boxes” to fat “storage servers”, but everyone has those too. 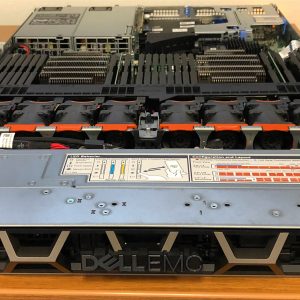 The latest Dell EMC Servers have everything you want, but what truly differentiates them?

This is what was in my mind when visiting Dell’s Austin headquarters as part of Tech Field Day back in February, and remained top of mind at Dell Technologies World and when visiting Dell EMC in Hopkinton for Storage Field Day in June. The latest generation of Dell servers (now part of Dell Technologies’ Dell EMC division) have just about every feature you could want, whether you’re a small business, an enterprise datacenter architect, a storage OEM, a hyperscaler, or are focused on integrated application infrastructure. They check all the boxes, from configurations to management software to converged stacks. But why pick Dell EMC over some other server vendor?

The same question came up when a Dell EMC PowerEdge R7415 arrived in the Gestalt IT office for testing. As someone who has been working with server hardware for over 20 years, I was thrilled to see all the clever design details, from airflow baffles to serviceability features. And as a tech geek I couldn’t wait to test out the amazing 32-core AMD Epyc 7551P CPU (yeah, it rocks). But what makes this server more valuable than one from IBM or HP Enterprise or Supermicro, let alone one I could build myself from NewEgg?

The answer has been apparent to the “IT Pro” in me for years, and was strongly supported by the Dell EMC presentation at Tech Field Day. It’s all about the management. 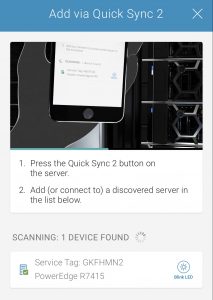 OpenManage Mobile connects to the server iDRAC management platform instantly and securely and allows full configuration of the server.

Take the PowerEdge R7415, for example. It features Dell EMC’s latest Quick Sync 2 technology for the integrated iDRAC management platform. This is a big upgrade from previous versions, and so much nicer than similar offerings from competing companies. It now supports Bluetooth and Wi-Fi and the OpenManage Mobile app is in the iOS App Store. I opened the app on my iPhone, pushed the Quick Sync 2 button on the server faceplate, and the app discovered the server. I then scanned the QR code on the pull-out service tag and I’m in.

The latest version of iDRAC on the web is also dramatically improved. There’s no more Flash and everything has been updated with modern (Dell/Windows-looking) design. All this links to an upgraded iDRAC system internally, with a dual-core ARM CPU and more RAM to speed up all operations.

Sure, every server maker has a management platform. But most of them are pretty awful. We have a pair of homemade SuperMicro servers in the office, for example, and their IPMI is almost unusable. It’s so bad that the only thing I ever do with it is power the servers on and off! The remote console is so frustrating that I’ve given up on trying to use it. Sure it’s a few years old, but Dell’s iDRAC was way better back then too (even if it used Flash…)

Dell EMC showed off OpenManage Mobile as part of their Tech Field Day presentation (on an iPhone even) and you can see just how simple and powerful it is. Note: iDRAC Quick Sync 2 is only available on Dell EMC 14G servers and is an optional add-on.

Excellent management tools aren’t enough to sell an expensive server, but they certainly differentiate it in the face of similarly-specified competitors. Watch the video and see what you can do using the Dell EMC OpenManage Mobile iPhone app! Features like this set the newest Dell EMC servers, like our test PowerEdge R7415, apart from the competition.