It’s now been a couple of days since the second day of the Gestalt IT Tech Field Day, I’m actually taking the opportunity to write this on the plane on the way back from Seattle. So once again I thought I would do a summary post until I get the chance to write up a detailed post on each vendor.

Compellent were one of the main sponsors for the Seattle Tech Field Day and were responsible for us getting access to the Microsoft Campus. So a big thank you to Compellent for their support of Tech Field Day.

Compellent are a company I have had dealings with before, I looked at buying one of their storage devices back in 2008 and was very impressed by the product they had on offer at the time.   This was a great chance for me to revisit Compellent two years on and see how things had changed.

Compellent in general still appears to be much the same product that I liked so much back in 2008.   Their pooled storage model, software controlled RAID write down, space efficient snapshots and WAN optimised thin replication are all superb   features. There main differentiator back in 2008 was their ability to do automated storage tiering (Data Progressionâ„¢), something that others in the industry are starting to catch up to (EMC FAST). Compellent’s Data Progression technology is one that many customers actively use with good results, I was slightly disappointed though to learn that their data movement engine only executes once every 24 hours and cannot be made more frequent.   I’m not sure how that compares to EMC FAST but is something I’ll include in a more expansive post.

A feature I had heard of but didn’t quite understand previously was Compellent’s Live Volume.   It’s another unique feature for Compellent and one of my fellow delegates even described it as “EMC vPlex that you could actually afford”. Compellent implement the Live Volume feature at software level as opposed to a hardware based implementation like EMC vPlex. Compellent are able to present the same volume, with the same identity in two different locations, they do this using the underlying WAN optimised asynchronous replication. One point of note was that this is not an active / active DR like setup,   this is a setup for use in a controlled maintenance scenario, such as SAN fabric maintenance or a DC Power down test.

Compellent also took the opportunity to share some roadmap information. Highlights included the release of the 64 bit, Series 40 Controller base on the Intel Nehalem, encrypted USB device for seeding replication, a move to smaller 2.5” drives and 256 bit full disk encryption among others.

Although we were situated on Microsoft’s Campus for a large part of Tech Field day we were never presented to by Microsoft, which was a shame.   We did however get the chance to visit the Microsoft store which is for employees only.   It gave us all a chance to buy some discounted Microsoft Software and souvenirs of our visit to Redmond which we all took advantage of. 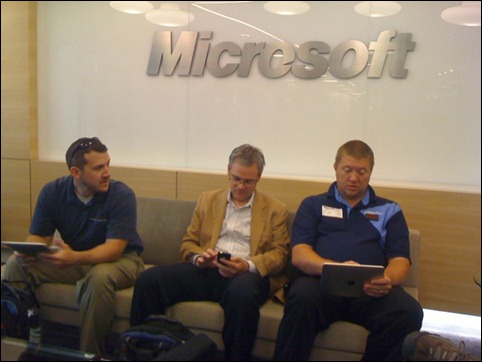 Our afternoon session was spent a short bus ride away from Microsoft at NEC America’s Seattle office.   We were here to hear about NEC’s storage offering (I had no idea they even did storage) and more specifically the NEC HYDRAstor range. We had a very in depth session on this fascinating product with Gideon Senderov, Director of Product Management for the HYDRAstor range.

NEC have taken an innovative approach with this product, one I was not expecting. They utilise full blown NEC servers to provide a two tier architecture made up of front end accelerator nodes and back end storage nodes.   On top of this they don’t use the traditional RAID model, instead using something known as erasure coding to provide improved data protection. I will deep-dive this particular data protection method in another article but it was a very interesting and different approach to what I’m used to.

The HYDRAstor grid is marketed as “Storage for the next 100 years” and with it’s grid architecture it’s reasonably easy to see how that statement could be realised.   You can add additional nodes into the grid and it will automatically redistribute itself to take advantage of the capacity.   You can also mark nodes for removal,   the system evacuating the data to enable nodes to be removed from the grid.   This combined with the ability to co-exist old and new HYDRAstor nodes shows why it’s a good storage location for data with a very long term retention requirement.

It appeared to me that HYDRAstor was designed specifically as a location for the output of archive or backup data and not a primary data storage solution. The reason I say this is that when we discussed in-line de-duplication the product was already integrated with major backup vendors (Symantec NetBackup, CommVault Simpana, Tivoli Storage Manager and EMC Networker). NEC were getting very clever by stripping out metadata from these backup vendors to improve the level of de-dedupe that could be achieved with the product when storing backup data.

I will revisit the HYDRAstor, once I have had a chance to go over my notes I fully intend to dedicate a full article to it as I was very impressed.