We all grew up with tales of superheroes, either in comic books or movies. Characters like Superman or Captain America showed us how determination and a sense of ‘right’ could make people capable of doing anything. Of course, a dose of alien physics or super serum doesn’t hurt either. When you can lift a car over your head, you really can do anything.

But super-heroics have a downside too. Have you ever noticed that Superman spends all his time fixing problems? Every issue is just another in the long list of crises he has to deal with. It’s like a firefighter racing to the scene of the next blaze to put out. It’s even like a mechanic that spends all their time fixing the little problems in cars that come into the shop.

What about the other characters? The ones without super strength or speed? Batman and Lex Luthor can’t win a fistfight against an alien or a super-soldier. How do they manage? They plan. They have plans within plans. Lex Luthor spends most of his time creating situations that force Superman to fight fires. Batman has a contingency plan for everything, including Superman. Those plans make the characters proactive instead of reactive.

By now, you’ve probably seen the parallels in networking. We’re all networking superheroes. We spend our time fighting fires and dashing from one problem to the next. We’re the mechanics that clean up after the messes. We like to see ourselves as Superman from the positive side of being able to solve any problem. We get the negative traits of being forced to take issues as they come too.

Instead of focusing on being a superhero for your network, you need to start thinking more like Lex Luthor. Yes, this means you have to think like a supervillain for once. Trust me; it’s worth it. Once you stop looking at your networking issues as problems, you can beat into submission with your fists, and instead outthink your potential pitfalls; you will understand how you need to approach the job of being a real network orchestrator. 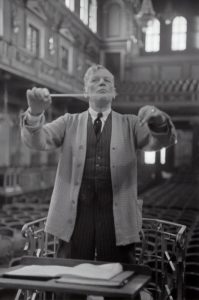 Riverbed has some great ideas about not being a superhero or mechanic as well. During Tech Field Day 22 late last year, it had a short presentation from Vincent Berk about moving away from being a wrench turner and instead becoming a conductor. Here’s a link to that video:

Vincent brings up some of the same points I’ve discussed above in a different way. If you think that you can tackle any problem as it comes your way, you will eventually lose. You can’t hope to have a solution for every problem. Instead, you have to learn to anticipate the issues and create situations where they’re easily solved. Or, better yet, solved before they ever become problems.

What is a supervillain without good minions? Lex Luthor has Mercy Graves. Joker has Harley Quinn. And, thanks to Riverbed, you have the power of artificial intelligence and machine learning at your disposal. While not as colorful as Dr. Quinzell, AI and ML are powerful assistants in your network mastermind journey.

Note that I didn’t say they’re going to do all the work for you. AI and ML are only as powerful as the mind that wields them. They can provide insight into data, but they need to be fed that data. AI and ML can give you insight, but they can’t produce it out of thin air. You have to apply the tools in the right place at the right time to get the best results. No AI will ever replace a human mind, but it can give you a level of intelligence you couldn’t achieve independently.

The more complex the network, the less capable it is of following hard-and-fast rules about operation and configuration. That means rule-based computer systems fall apart when trying to analyze it. Rules are easy to code and easy to apply. Complexity and rules are anathemas to each other. Instead, humans can help untangle the complexity and learn to apply AI, where it needs to be placed to have the best effect.

Take something as simple as path diversity. We can configure devices to use Wi-Fi as the primary source of communications with LTE as a backup. Without rules that say that connection problems or congestion should cause a failover, you will never use your backup link. However, what constitutes congestion? Is it a slow link? What defines slow? These are all data points you can gather from AI and ML. However, you can’t understand the difference between ‘slow but usable’ and ‘too slow to be productive’ without human interpretation. Every human is different, so you will need to tune your system’s rules by taking input and making decisions.

If this all sounds like a lot of extra work, you’re not wrong. But the hard part of being an orchestrator isn’t learning how to play an instrument. It’s learning how to make all the instruments play together to create a symphony. Likewise, Lex Luthor doesn’t just need to plan for Superman. He needs to prepare for Batman and the Flash and plan how to move an entire armored car across Metropolis in less than 30 seconds without alerting the police. His job is making the plans that others carry out. When he performs his role correctly, the rest falls into place.

If you’re okay with being a superhero, then you should keep on being happy. However, I think you’ll find that you would better spend your energy working on a plan to keep issues from happening or prevent them from being big fires, rather than hopping from one fire to the next. The more effort you put in upfront, the less time you’ll spend on the backside working your fingers to the bone. I’m not saying you have to shave your head and develop an evil laugh. Just think more like the schemer and less like the hero.

For more information about Riverbed and their networking solutions, make sure to check out their website at http://Riverbed.com.