Composable Infrastructure as a concept entered most people’s conciosusness a few years ago when HPE announced their Synergy platform in 2016. So you could be forgiven if you thought composable infrastructure was a term only used by HPE and that implementing it relied completely on proprietary hardware. If you have paid attention to our coverage of the topic however, you would realize that is not the case. One of the major players in composable infrastructure, Liqid, has been building a reputation as a leader.

The written coverage of Liqid up until now has been exciting to follow, but we were able to score a coup when we saw Liqid during Tech Field Day Extra at Dell Technologies World back in May. During the sessions, Liqid CEO Sumit Puri discussed composability with the delegates and Liqid’s take on it through hardware openness and defining resources at “trays” that can ben assigned as needed. If that is a confusing sentence check out the videos from Sumit’s presentation. He does a great job of breaking down Liqid’s products and architecture.

Liqid Company and Product Introduction from Gestalt IT on Vimeo.

How is Liqid Different?

The idea of combining separate pools of compute, storage, networking, and even GPUs via software isn’t necessarily new. But where Liqid has managed to differentiate themselves from other solutions is by giving customers a choice in hardware. The unifying component is the fabric switch by Liqid which is running the software necessary to aggregate the separate resources. By giving customers the choice of hardware providers and further extending that choice by offering fabric in the form of PCIe, Ethernet, and Infiniband, Liqud gives customers complete control over their architecture.

When it comes to choosing between say PCIe or Ethernet as the fabric for a Liqid based composable infrastructure, the determining factor comes down to whether latency or distance is more important.  If you need latencies low enough to prevent a bottle neck for NVMe storage for example, then you would choose PCIe as it can have latencies under 150 nanoseconds. Much lower than NVMe latencies which are measured in microseconds. If you need to aggregate resources beyond the boundary of a rack, then you may choose Ethernet or Infiniband.

Dissaggregated HCI is a term that has drawn the ire of some industry pundits who see it as a backwards step or altogether antithetical to the idea of HCI. Understanding how HCI can truly be disaggregated by assembling the necessary resources with a solution like Liqid may see those folks change their tune. Combining separate pools of compute storage and networking to create the building blocks for a solution like VMware vSAN or Nutanix could be the kind of injection to propel HCI into the future.

This is just one of the many possible uses cases for composable infrastructure. All of a sudden being able to reuse resources that were dedicated to employee use during the day for batch operations at night helps enable better hardware utilization and lower overall infrastructure spend. The promise of being able to deliver custom infrastructure through an API brings can help bring the rapid elasticity of cloud computing into the data center. 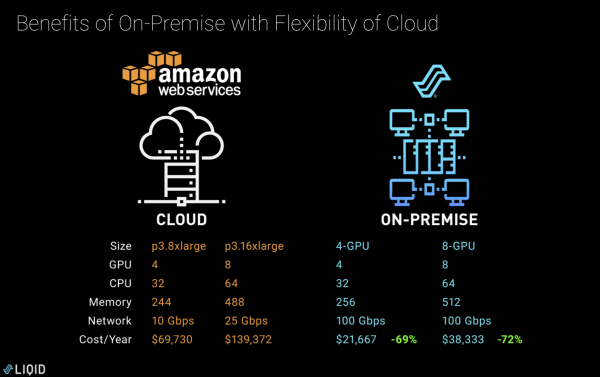 The overall promise of composable infrastructure is flexibility, and like many solutions the choice of vendor depends on how much you value simplicity vs. flexibility. Liqid is a providing a more flexible solution for customers in exchange for simplicity. Being able to choose from multiple hardware vendors and also select the fabric that is the best fit is very attractive for a large number of customers, even if it requires more thoughtful planning.