EMC caused a major stir on April 14 as they announced the next-generation Symmetrix enterprise storage array, the V-Max. Since that time, many of the features have been discussed and dissected on various blogs at the same time as EMC moves forward with sales of the new system. But one question remains: When can end-users actually purchase and use the V-Max system as described?  And in particular, When does the V-Max get the most desirable and hyped Fully-Automated Storage Tiering (FAST)  and scale-out features?

So let’s say a customer decided to purchase a new V-Max system from EMC today. What would they get?

So our V-Max customer would be able to buy and deploy a solid, scalable, next-generation enterprise storage array that does everything they expect from existing systems and a little more. This is more than many new or re-engineered storage products can boast.

But our customer does not get everything that has been talked about regarding the V-Max architecture. What don’t they get?

So the answer to the core question of whether the EMC Symmetrix V-Max is shipping is yes. Customers can go out and buy one. But they will not get all of the functionality discussed and presented by EMC and its representatives last month.

Fully-Automated Storage Tiering (FAST) is one of the most significant capabilities of the V-Max platform. As described,  FAST will not be available for a year or more. This is not a secret or a scoop – EMC is the first to admit that FAST was pre-announced and is “Coming Next”! 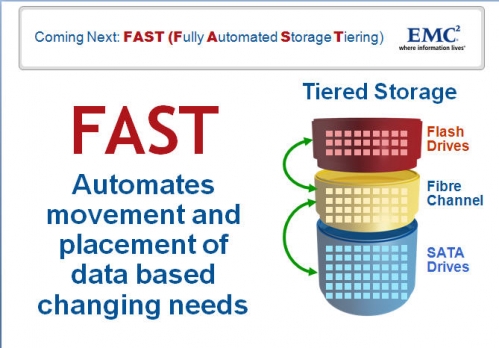 What is FAST? It is an automated tiered storage technology that can place data on different tiers of storage based on requirements. High-performance data on flash, bulk data on SATA, and so forth. EMC V-Max marketing materials, and the launch content, spent much time focusing on this technology, telling us that it automatically adjusts tiering of data, not just volumes, and reacts as needs change, rather than statically placing data. We’ve reported some confusion about just how FAST accomplishes this in the past, but we all agree that this would be an awfully nice way for an array to manage data.

At the core of FAST is EMC’s recently-introduced virtual provisioning technology. Why is FAST so much better than VP, and other competing automated storage tiering technologies? According to EMC blogger, Barry Burke, FAST has five key benefits:

Let’s give EMC some credit for its FAST vision, as well as the pieces that have already been shipped. But we’re still quite a way off from seeing this FAST vision realized in production technology:

Why does it matter that EMC won’t ship FAST V2 until next year? Simply put, anything less than FAST V2 will still not effectively utilize the expensive EFD capacity paid for by EMC customers. Even FAST V1 will take up expensive high-performance flash capacity with the entire contents of a LUN, including empty space! Customers wishing to conserve EFD capacity will use virtual provisioning to only store “used” data on flash. But these cannot be easily relocated if demand does not meet expectations, and not all of that used data requires high-speed flash storage. EMC also lacks thick-to-thin (or thin-to-thick) technology, though we suspect they’re working on that.

So customers have a choice: They can either use their EFDs more efficiently with thin volumes, or move data between EFDs and disks  as needs change. They cannot have both.

An open question is how much EMC will charge for FAST V1 and V2. Assuming they are like Apple with the iPod Touch, and their history affirms this, EMC will charge for FAST  as each major new capability is delivered. EMC has always charged for major new features. This is due to accounting rules which prohibit a company from charging customers ahead of releasing major features. The only way around this would be for EMC to recognize V-Max revenue as recurring over time, as in the case of the iPhone at Apple. Fat chance of that! Note that EMC is also talking about bringing FAST to CLARiiON and Celerra, but those timetables are not disclosed.

How Big Is Your Virtual Matrix?

Many have wondered about EMC’s choice of a name for this new storage system, some speculating that since the “V” stands for “virtual”, the V-Max was designed for server virtualization environments. EMC CEO  Joe Tucci’s comments at the V-Max launch seemed to indicate this as well.

However, while it certainly is targeted at VMware vSphere and similar systems, the “V-Max” name actually has a very specific, and very different, meaning. “V-Max” is actually a reference to EMC’s new “Virtual Matrix” architecture, which allows V-Max engines to combine into a scale-out array with a virtual matrix of interconnects. Like FAST, the Virtual Matrix Architecture is the real vision of revolutionary storage from EMC. And like FAST, this vision is nowhere near being realized.

V-Max is so far being sold as a stand alone machine, not a scale-out cluster. At current GA, EMC is only offering 8 engines that are part of the same system cabinet (physically connected through MIBE and SIB), but there is nothing available that would connect 2 of these system cabinets, where instead of 8 engines you are now running 16 or 32 engines, forming a real V-Max. 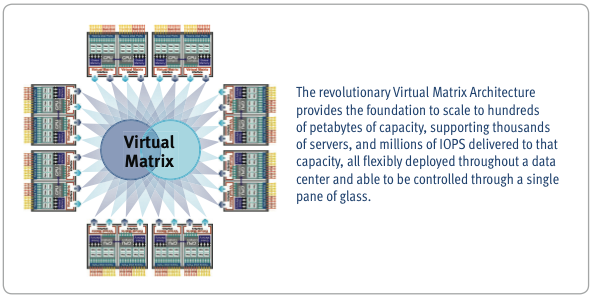 EMC’s “vision” clearly extends well beyond 8 engines and a single V-Max.   EMC’s design allows for a federated set of V-Max machines that can all be managed as a single entity, and the company alluded to this in their product introduction.  They suggested that these separate V-Max machines wouldn’t even have to be in the same place, physically.

Although the vision articulated at the product’s introduction talked about massive scaling in multiple locations, EMC’s maximum current configuration for the V-Max is 8 engines with up to 128 Xeon CPU cores, 1 TB of RAM, and 128 each front-end and back-end storage interfaces linked to 2,400 disk drives. This is no tiny system, to be sure, easily doubling the current DMX-4 array’s scalability as well as besting the competition. In fact, EMC can rightly claim that a V-Max can be configured today to be the largest integrated enterprise storage array available.

But 8 engines linked by local RapidIO connections in a single data center isn’t a revolution. The revolution happens when EMC realizes its vision of linking “dozens” of engines, thousands of ports, and tens of thousands of drives into a geographically dispersed system. Former EMC executive,  Dave Donatelli, now controversially linked to HP, claimed that the V-Max can support up to 256 engines in a product launch video that has now been removed. IDC analyst, Benjamin Woo,  talked about EMC’s ability  to support a “single namespace” across geographies during his launch coverage. EMC’s Chuck Hollis says that “the overall architecture can eventually grow into literally thousands of ports, thousands of processing cores, tens of thousands of disks, and many terabytes of cache memory — all operating as a single, tightly-coupled array.” EMC’s Barry Burke also suggests that future revisions to the Virtual Matrix architecture could scale well beyond anything hinted here.

Again, in that same post, EMC’s Hollis tells us that the architecture delivers four key benefits in terms of scalability (bulleted for your pleasure):

So a reader would look at this and think to himself, “this new V-Max starts as cheap as a competing midrange array and can scale out with different building blocks to span my entire data center, or even my entire enterprise.” This is a great promise, and awfully near to the holy grail of enterprise storage.

The problem is that none of this is possible today.

So even today’s V-Max system does use the Virtual Matrix architecture. It’s got a virtualized matrix interconnecting the engines, after all. But it’s nowhere near the scale-out promise of the Virtual Matrix concept. That’s quite a ways off still.

Conclusion: V-Max Is Not Overtaking The Future Yet

It is important to note that EMC sales literature does not claim capability beyond what’s currently on the truck. The V-Max data sheet, for example, makes no mention of FAST or scalability beyond 8 engines. And EMC’s Dave Graham is characteristically straightforward listing what’s in the box. In fact, EMC’s official web site and literature probably errs on the too-cautious side: A casual visitor might well ask himself, “where’s the beef?”

Why might an average storage buyer think there is more “beef” to be had? One only needs to watch EMC’s V-Max launch, and the surrounding coverage. Indeed, EMC’s own theme for the launch was “Overtake the Future!” EMC’s customers expected a revolution, and a revolution is what the company promised.  This isn’t anything new, unexpected, or even out of place. Companies often tout the theoretical future capabilities of their new products but don’t deliver on those promises for some time. Many have accused Microsoft of using this tactic to combat Windows competitors, for example. And let’s not forget the industry’s fascination with legendary vaporware products!

But the company’s boosters seem to want to have their cake and eat it, too. They’ve poured on the verbiage describing FAST, and used this future capability to declare victory in the battle against the likes of HDS, 3PAR, and Compellent. EMC’s Hollis tells us that “there’s nothing remotely like V-Max in the marketplace today”, and other EMC folks have made similar claims.  As Wikibon points out, “EMC’s pre-announcement of Fully Automated Storage Tiering (FAST) is an admission that without FAST the answer is essentially no, EMC can’t compete on cost.” In other words, EMC was forced to prematurely unveil their FAST vision to keep their customer base from jumping ship to competitors already offering similar functionality. The same is true of the scale-out capability of the Virtual Matrix architecture.

For now, EMC has merely introduced a solid next-generation enterprise storage array. V-Max without FAST and scale-out is a nice-to-have refresh of the Symmetrix DMX-4. EMC should be especially respected for leaving all of the core  Engenuity  features like TimeFinder and SRDF intact, since this must have been no small feat. V-Max with FAST V1 is a more attractive proposition, but does not go that far beyond the capabilities of Symmetrix Optimizer. The same can be said of the 8-engine V-Max limit – it’s larger, but nothing to get too excited about.

V-Max with full-on FAST V2 and multi-site heterogeneous scale-out is the real revolution in EMC storage.  If everything plays out, you could have several V-Max systems in the same data center, or perhaps even different data centers, all being managed as a single entity.   Then layer FAST on top of that (at the block level), and you have something unlike pretty much anything else on the market today. The question is, when can they achieve this, and will some of the other vendors catch up in the meantime?

This is what observers, analysts, and customers were looking for. And this is what they might think they saw. But in reality, we’ll all just have to wait another year or two and see what develops.