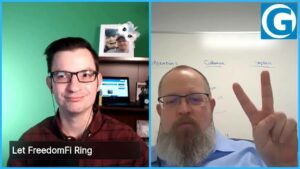 FreedomFi is using open spectrum for private LTE networks, Azure Sphere goes GA, Intel still makes 5G things, and Cisco launched SecureX. Join Rich Stroffolino and Josh Fidel to get caught up on all the IT news of the week with the Gestalt IT Rundown.

Mozilla announced it will start switching Firebox browser users to Cloudflare’s encrypted DNS over HTTPS (DoH) today by default, and roll out the change across the United States in the coming weeks. The company says this will help prevent ISPs and third parties from seeing what DNS lookups a browser is making and monitoring customers’ Web usage to deliver targeted ads. Firefox will offer a choice between Cloudflare and NextDNS for DoH but that Cloudflare will be used as the default.

UK Accounts Go to the US

Google plans to move UK user accounts under US jurisdiction as a result of the UK leaving the EU. Google told Reuters “The protections of the UK GDPR will still apply to these users.” UK user data is kept in Ireland, part of the EU, which would make it more difficult to recover in cases of criminal investigations. The US Cloud Act makes it easier for British authorities to obtain data from US companies.

McAfee announced they acquired Light Point Security, a browser isolation company founded in 2010 by former NSA security researchers. Their solution puts web pages in a cloud-based sandbox and then streams what is essentially footage of the content to the user’s browser. McAfee plans to integrate it into their Unified Cloud Edge.

Intel announced serveral chips designed for 5G carriers and enterprises. The company announced its second-generation Xeon Scalable processors will offer 36% better performance than the 1st gen and come in Network-optimized SKUs, offering 58% better performance for network function virtualization workloads. The company also introduced its first SoC for 5G base stations, the Atom P5900. The 10nm chip includes hardware-based network acceleration features, including integrated packet processing, ultra low latency, and a switch for inline cryptographic acceleration, offering up to 5.6 times packet security throughput compared to software-based solutions. Intel also announced the Ethernet 700 series, 5G-optimized network adapter cards, aimed to provide ultralow latency 100-nanosecond phase accuracy for 5G network service synchronization. The also announced a new eASIC, which can be customized to provide high performance on specific workloads, although this isn’t specific to 5G. Intel got out of the 5G modem space, but seems to be getting aggressive to handle the backend.

Josh, we all remember 2018, it was a simplier time. Avengers Infinity War was tearing up the box office, the kids were tapping their toes to Ed Sheeran, and Microsoft introduced us to the beta of a little IoT service called Azure Sphere. All these years later Microsoft announced this week that Azure Sphere is going GA. It’s an interesting approach to the IoT security problem, with MS offering a sort of vertical integration from certified microcontrollers running a Linux-based Azure Sphere OS, and integrated into the Sphere cloud service to provide authentication, threat response, and on-device and application failure information. Microsoft currently only certifies the MediaTek MT3620 microcontroller for the service, but is working with NXP and a cellular option from Qualcomm for Azure Sphere as well. MS has seen Sphere preview customers using it across consumer, retail and manufacturing applications, and using the boards as kind of a trusted IoT gatekeeper for less secure devices.

Cisco SecureX Gonna Give It To Ya

Cisco unveiled a new cloud-native security platform called SecureX, designed to provide workflow automation and analytics for better security visibility. This will show information from a variety of Cisco security and third-party solutions, looking at data across endpoints, cloud, network, and applications. This is designed for easy integration down the road with a connector framework, with a low-code drag and drop interface. It’s due out in June and will ship with every Cisco Security product going forward. Is Cisco’s Security Single Pane of glass too good to be true Josh?

Boris Renski, co-founder of OpenStack and Mirantis, launched FreedomFi, which will use open source tech to build out private 4G networks running on the recently opened Citizens Broadband Radio Service (CBRS) band. CBRS uses about 150Mhz in the 3.5GHz band, providing 4 times the range and coverage of typical WIFI or mmWave 5G. The backbone of this is Evolved Packet Core, an open-source SDN project for 4G, which will enable API-drive private LTE networks on open spectrum. Renski says the next two years will see a lot of experimentation in the space, and likens it to the early days of private cloud. Josh how can private LTE networks shake things up in enterprise mobility?