I was lucky enough last week to be involved in a Gestalt IT conference call with Symantec.   The conference call was designed to give us all a sneak preview of what Symantec were planning to announce at VMworld 2010 in a couple of weeks.   Unfortunately it was under embargo, that is until today!

There were a couple of announcements being made, Symantec introduced a new NFS storage product called VirtualStore and made some further announcements about NetBackup 7 and new VMware specific features.   However the most interesting announcement on the call for me was the release of Symantec Application HA for VMware.

Symantec have been looking at why customers are not going “the last mile” with virtualisation.   Why are customers not deploying their Tier 1 applications on their virtual platforms? Symantec’s view on this was that customers still have issues with application level failure within guest VM’s.   This product has been designed to fill that void and at present is a product with no real competitors.

As the call progressed the current HA options were described by Symantec and discussed by the group. The obvious one is VMware HA which covers a physical host failure event. Within the VMware HA product there is also VM monitoring which covers you in the event of an OS level failure event, such as a   blue screen.   Then you can of course employ other technologies such as OS level clustering, however you then have to take heed of caveats that hinder the ability to use features such as vMotion and DRS.

I’m always sceptical when I see new virtualisation products, one of my fears is that companies are attempting to just jump on the crest of the wave that is virtualisation. Symantec are obviously a bit more established than your average company, but as always the jury is out until we see a final product doing the business for real.   It transpired during the call that the product is actually based on Symantec Veritas Cluster Server,   a product with a long history in application availability.

Veritas Cluster Server has a lot of in built trigger scenarios for common products such as Microsoft SQL Server, Exchange Server and   IIS.   On top of this built in, out of the box support Symantec also have a VCS development kit allowing for custom scenarios to be written.   I like this approach,   it reminds me of F5 Networks use of the customer community to support the writing of custom rules and features for their product.   If a custom rule or feature has enough demand then they spend the time developing it into their product range.       Perhaps Symantec could look at leveraging their customer base and community in this way and improve the support around VCS trigger scenarios.   One other potential use of the VCS SDK that springs to mind is for application vendors who are making specialist software, CRM, ERP, Finance systems, etc.   They could look to build in Application HA into pre-configured virtual appliances, that would be a great selling point for any software vendor.

The deployment of the product itself takes the form of a guest deployment / agent. Technical deep dive information on the exact integration between the Symantec product and VMware was thin on the ground.   However there was mention of Symantec’s integration with the VMware HA API,   something that I don’t think has been announced by VMware just yet.   The description given to us during the call was that if Symantec Application HA failed to restart the application it could send a downstream API call to VMware HA and ask it to restart the VM’s Operating System.   An interesting concept, something I am sure we’ll hear more about at VMworld.

Licensing for this new product is quite competitive, $350 per virtual machine, a small price to pay for ensuring your Tier 1 application recovery is automated.   Symantec have promised full integration with vCenter Server and the screenshot below shows Symantec Application HA in action monitoring a SQL 2008 server, click on the thumbnail to see a full size image. 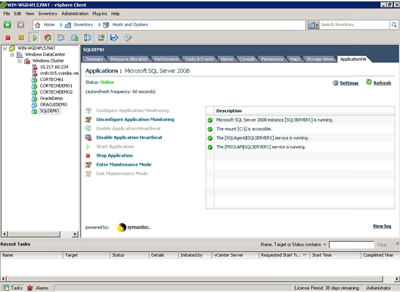 If you would like to learn more about Application HA, then get along to VMware and Symantec’s break out session at VMworld. – http://www.vmworld.com/docs/DOC-4658

Alternatively you can listen to a Podcast from Symantec’s Niraj Zaveri discussing the new product.   – http://www.symantec.com/podcasts/detail.jsp?podid=ent_application_ha