The transformation I’ve seen at Juniper Networks is nothing short of astounding. Who remembers just five years ago when Juniper found itself locked in a huge fight with an infamous activist investor about spinning off the enterprise networking division to focus on the lucrative service provider market? This battle threatened to sink Juniper’s hopes to stay in the enterprise networking market.

Fast forward to 2020 and a year and a half removed from the acquisition of Mist Systems. You would be hard-pressed to argue that Juniper isn’t making waves in the enterprise space. You would be even harder pressed to argue that Mist itself hasn’t made huge changes inside of Juniper. Like a fog creeping in over the hills in San Francisco, Mist has pervaded the campus networking segment of Juniper and their software focus is poised to go even further.

To understand why this is happening, all you have to do is watch this video from Mobility Field Day 5 featuring Bob Friday:

The unifying messaging coming from Mist is that AI is going to change the way we do networking at the edge and beyond. The idea of junior admins making simple changes and doing basic troubleshooting is giving way to software making those changes and choices for us instead. Now, intelligence built into the system can take care of the easy stuff and let the human mind focus on the hard problems.

This is the message that Mist has been evangelizing for years. What makes it a different story with Juniper then? To me, it’s watching just how far the AI discussion is going. It’s not just wireless networks. It’s security and enterprise switching and WAN networking. That’s just what we’re getting today. Soon it will also be carrier routers, edge devices, and more. AI isn’t something that will just run on one device. To Mist, AI is going to run everywhere. 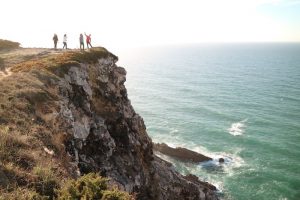 That changes the way we look at networking. The edge is already being redefined away from Ethernet cables to wireless access points. More importantly, the edge devices need more than just simple packet moving software. Instead of having a lightweight edge that just takes one signal and translates it to another, you’re going to have to have bigger, more intelligent devices. If you’re already building for newer protocols like 802.11ax, you already know you’re going to need a bigger AP to handle all those radios. Why not take advantage of that size with some heavy-duty computing power?

The edge of the network is where decisions are going to be made. Not with simple ACLs or basic policy, but instead with AI and complex intelligence. Packets are going to be sent and received and forwarded based on the analysis that can only be provided by something that can understand the business logic that drives work. One packet needs to be forwarded to the cloud while another needs to head to the corporate data center. One packet needs to be protected in-flight because of critical patient data and the other needs best-effort treatment because it’s just someone streaming a movie because they’re bored. Those decisions need to be made to keep the network stable and performing correctly. But doing it quickly with today’s massive packet flows is going to take more than simple ACLs.

Mist had this figured out even before the acquisition. They were already working on building a smart system that could make these decisions and help augment work happening at the edge. As soon as Juniper made the acquisition, the changes were legion. Juniper has started to integrate this intelligence throughout their networking devices. Everything now feels like the edge. Packets can be steered and dealt with quickly with high accuracy. That kind of intelligence means better performance for users and less hassle for operators.

All this comes from implementing Mist’s AI expertise in the enterprise. Imagine how much further we can go when it pervades everything? Not just an EX switch. How about an MX router? What if your core routing network could figure out there was a BGP transit problem upstream and suggest changes to fix community propagation? What if your edge routers could understand microburst congestion along a link and make changes to route traffic to a different cloud on-ramp to keep Office365 traffic flowing right along? It sounds amazing and wonderful, doesn’t it?

In fact, this is the vision of software-defined networking (SDN) we were all promised years ago. Software making decisions to make our networks better. But it never came to pass because it turns out that the humans making those decisions don’t scale. What was needed was a way to get the humans out of the loop and drive these changes automatically. This is where Juniper and Mist are headed. By using AI to drive these policy decisions you can arrive at a place where performance issues a quickly resolved, problems in configuration are easily remediated, and reporting is automated so you know what was changed when and why. It is the utopia that we have all hoped for.

Mist is building a pervasive edge around everything. Soon it won’t matter if a packet came from a wireless mobile device or a data center server. The packet will be treated correctly and quickly and go on about its way, never realizing that it was handled by an intelligent system built by spreadsheet cells and not brain cells. Mist is redefining how we network. And it has never made me happier to be sitting on the edge of radical networking changes.