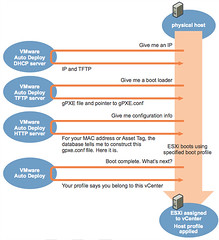 The auto deploy application which comes as an OVT template is basically just a jumped-up vMA, with the added extra’s of DHCP, TFTP, HTTP servers and a deploy-cmd CLi and Database.

Here is a brief overview of how VMware Auto Deploy works once configured:

What I didn’t know and it didn’t mention on the labs site was that the ESXi install was Stateless. The ESXi install is only held in memory. So if you reboot the server you’d see a “No Operating System Found” message.

Before VMware Auto Deploy, I hadn’t ever given Stateless ESXi a second thought. The configuration of a host once ESXi was installed was a lot more detailed than the initial install itself and took time to complete. Now with the use of Host Profiles we are able to Install and Configure an ESXi host within a matter of minutes and 100% automatically.  At this rate I’ll be doing myself out of a job! However, I also believe it’s the way most large deployments will head in the not so distant future. We are beginning to see an increase in the amount of diskless servers/blades coming onto the market, which is ushering us down the route of using Stateless installs.

I’m not going to go into the in’s and out’s of the application configuration as it’s all available in the VMware Auto Deploy Administrator’s Guide. It’s very simple.