Data is the new currency. Surely you’ve heard that before. Deriving insights out of data that was previously thought to have little value is driving business into the digital economy. Application usage patterns, customer preferences, event traffic models can be derived from the massive amounts of data being collected. Data has largely been used by platforms to provide better targeting of consumers. This has proved fruitful for many ad platforms and retailers, but the use cases are far more expansive.

Expanding Use Cases for Massive Datasets

Within enterprise IT, gathering and understanding data has been particularly important for the purposes of application performance and identifying user behavior patterns. This can help developers to proactively address bottlenecks and implement new features based on usage patterns they find within the data. But gathering data across an infrastructure can aid with more than application development. Infrastructure and operations teams face common and similar issues and often times the causes are found deep within the logs and performance counters of the infrastructure they are responsible for themselves.

Collecting and correlating all this data would be a very challenging manual process. Fortunately, networking professionals have an alternative in PathSolutions. At their recent presentation at Networking Field Day, PathSolutions showcased their TotalView solution which is able to collect and correlate data from a multitude of network devices. There were many possible use cases for this solution that were on display during the presentation that could solve much of the complexity of troubleshooting and finding the root cause of an application or network issue.

As demonstrated during this presentation, often times solutions are actually simple, it’s just the troubleshooting process to determine the root cause that can be difficult and lengthy. Collecting data infrastructure wide can truly help to correlate behavior and across numerous devices and identify a root cause. Combined with data from past events within the same infrastructure, or simply common occurrences within enterprise IT in general can help quickly and accurately identify and remediate issues.

Dubbed TotalView, the marquee product by PathSolutions is able to provide insights and management of network infrastructure for everything from VoIP, to SD-WAN, to general networking, and even cloud. If you get a look at the video above, don’t let the interface fool you. What’s under the hood is quite powerful and would be any network engineer’s best friend the first time it saves them hours of troubleshooting frustration. 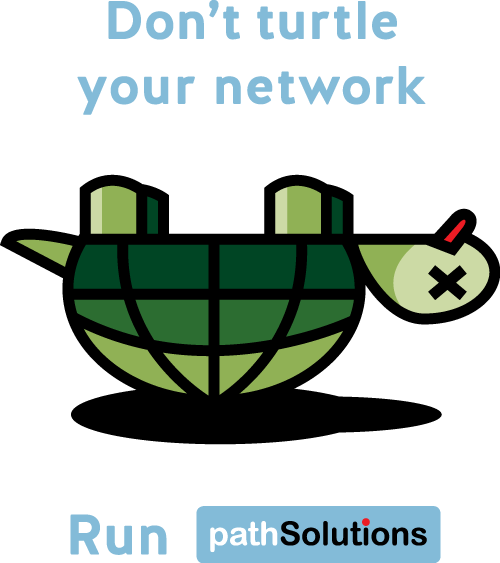 Don’t let yourself become as vulnerable as a turtle stuck on its back.

Not only can the information gathered by TotalView be used to troubleshoot issues, it can also be used as a proactive measure. Identifying issues before they cause noticeable problems for the business is the goal of any networking professional. PathSolutions uses the analogy of a turtle on its back. Even if it is concerned about its situation, it may not be panicking. The truth is that a turtle on its back is incredibly vulnerable and a moment away from doom. Much like the aforementioned turtle on its back, a network engineer with no visibility into their network and potential issues is vulnerable to disaster at any given moment. PathSolutions’ TotalView aims to prevent such situations.

In an era of data and analytics being used to drive new business initiatives and practices, it is nice to see some of the benefits of such practices being brought back to the age old custom of managing infrastructure. Although infrastructure is beginning to disappear behind an API for use by development and systems teams alike, there is still a team or even a single person behind that API ensuring that operations are smooth and transparent for those who consume said infrastructure. Those individuals or teams are well served by new tools for old problems.