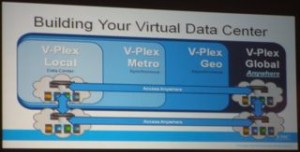 EMC has big plans for their VPLEX technology

The company previously outlined the vision for globally-distributed federated storage, but today’s announcement adds both meat and bone to that concept. EMC promises that VPLEX will transparently move data (and thus workloads) between storage systems locally or across a metro area and the company will eventually enable this technology across global distances.

All-caps VPLEX (never mind the spelling in the slide above) will be released in Local and Metro forms today in the form of an appliance starting at US$77k or a software subscription starting at US$26k per year. The slim client architecture does not include storage.

The VPLEX technology not only functions in heterogeneous storage environments, EMC claims it will take advantage of native features like thin or virtual provisioning, replication, and mirroring that EMC and other vendors provide. Timing for this functionality is unclear, as are specifics about exactly which features will be leveraged and in what configuration.

Each VPLEX engine includes two boards with dual quad-core Intel CPUs. EMC interlinks these using Fibre Channel, scaling to four engines in each of two locations. Confused? That’s a total of 32 CPUs, 16 boards, 8 engines, 2 locations, and one VPLEX. The company says this is nowhere near the maximum configuration, but it is all that has been qualified at this point.

Although many (including competitors) have compared VPLEX to Atmos, EMC’s new baby only virtualizes Fibre Channel block storage. The sweet spot seems to be implementing distributed server clusters with VMware, but we can imagine many other applications of the technology. EMC affirmed that Invista was complementary and compatible, though the future of that product is unclear. VPLEX offers greater functionality and flexibility, effectively eliminating whatever market there was for Invista.

Although EMC has shown an aptitude for product strategy sadly missing from much of the rest of the storage world, the company’s competitors are itching for a fight. HDS claims that their high-availability manager (HAM) technology “been there, done that” and one imagines that NetApp, IBM, HP and the rest will have something to say as well. Will EMC be able to differentiate their VPLEX strategy in the face of these competing technologies? The answer seems to be in sales and marketing execution, not just technological development.