Intel’s naming scheme has always been a little confusing and inconsistent. For example, the 3, 5, and 7 in i3, i5, and i7 don’t really give any insight into the actual specifications of a processor, they just mean good, better, best. Historically, best, or i7, chips have had hyperthreading enabled, running two threads on each core. i5 had the same number of cores without hyperthreading, and i3 had fewer cores, but with hyperthreading. This changed a bit in the 8th generation with the i3 no longer supporting hyperthreading, but the i5 and i7 stayed the same. 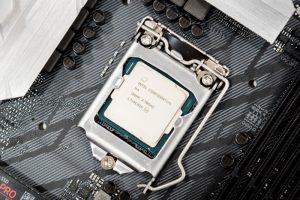 Now it looks like Intel is changing up the scheme even more, as benchmarks found in the SiSoft Sandra database list a Core i7-9700K processor increasing the core count from the current six cores in the 8th generation Coffee Lake parts to eight cores. It also reveals that Intel is forgoing hyperthreading on the i7, and therefore also the i5, processor, and saving it for likely what will be the i9, an 8 core, 16 thread chip.

So although the new generation i7 chips should still be faster, this change in naming may mean a little more than just Intel being Intel.

This change in branding does suggest that Intel is running out of room to maneuver. The 6th, 7th, 8th, and imminent 9th generation processors all (except for some rare 8th generation parts) use cores that are close derivatives of the Skylake design, with each new generation bumping up clock speeds and core counts a little. But both appear to be near their limits.

Read more at: Leaked benchmarks show Intel is dropping hyperthreading from i7 chips