Much can be inferred from the news that Micron and Intel are dissolving their partnership over the 3D XPoint. As The Register points out, it’s likely Intel wasn’t selling enough Optane 3D XPoint SSDs, which themselves are just not sufficiently faster compared to NVMe SSDs to be cost effective. This along with a slew of other missteps by both companies led to the partnership not being the success they wanted. 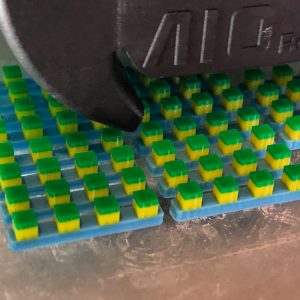 The initial wave of 3D XPoint products underwhelmed (but weren’t 3D printed like these trinkets!)

Intel promised 1000x better performance and endurance, heralding a revolution for computing overall, not just storage. But the first Optane products were much less impressive: Small M.2 cards with mediocre endurance and performance ratings. Even low pricing couldn’t save them. Then came some SSDs which were unable to compete with the best NAND alternatives except in extreme corner cases. Now, Intel has launched Optane NV-DIMMs but it’s been years of waiting and availability is remarkably limited.

Most of those early products were focused on gamers and home enthusiasts, with business products slow to take hold. Then there was the fact that Intel touted these as an extension to their latest CPUs rather than as standalone products. Even though the Optane Memory cards were quite usable on any M.2 slot, Intel sold them as a cache or accelerator for already-fast Core CPUs. It was a confusing message for everyone.

In the enterprise, 3D XPoint has shown more promise. Enterprise storage companies like Dell EMC and NetApp have begun talking about the promise of this technology in their storage systems, and it sounds like the hype might actually be true. Jeff Baxter of NetApp talked about 3D XPoint performance at Storage Field Day this Spring, and I had a similar discussion at Dell Technologies World. Talks like these were starting to encourage me to take 3D XPoint seriously again. But it still seems another generation away.

This is not the end of Intel’s and Micron’s work with 3D XPoint technology. Their partnership will continue through the development of the second generation 3D XPoint due in late 2019 and then both companies plan on independently pursuing a third generation. That is dependent on the gen-2 sales, though, as it is possible that one or both companies could drop the product altogether if it doesn’t live up to the hype.

At the end of the day, the problem so far is that 3D XPoint was over-promised and under-delivered with only a small advantage over NAND in the first generation. Many have already given up on it. If it’s really going to be a revolution, Intel and Micron have got to start talking about it more seriously and enterprise vendors have to start delivering 3D XPoint-powered products.