Server virtualization challenges the enterprise storage status quo, so storage must change to support virtualization. Virtualization platforms like VMware vSphere concentrate and randomize I/O, demanding low latency and high performance from underlying storage systems. Although many conventional storage arrays can provide the I/O required by VMware, the next step will be tighter integration between storage systems and the hypervisor.

Coming out of stealth at VMworld 2009 in San Francisco, startup EvoStor exemplifies this new virtualization-optimized storage concept. Taking existing storage concepts like scale-out grid and automated storage layout, EvoStor’s offering is designed exclusively to support the VMware vSphere platform. This level of focus is unprecedented in the industry, and demonstrates the incipient power of storage virtualization in general and VMware in particular.

So what exactly is EvoStor? Although their coming-out party at the Museum of Modern Art was well-attended and included an appearance by VMware CEO, Paul Maritz, many were left wanting details. The company set up a demo lab next door at the W hotel, and I was able to examine their product in more detail.

EvoStor is a scale-out clustering storage product running on commodity-based (though custom-built) storage server hardware. The company eschews many long-standing storage traditions, including RAID, and instead relies on intelligent data placement for data protection, performance, and availability. Each node contains a complete x86 server and has 12 slots full of SATA, SAS, or flash drives. The minimum configuration is three nodes, which the company promises will sell for under US$50,000.

What Do VMware Admins Need?

The product probably doesn’t sound all that novel at this point, but  the innovation of the EvoStor platform lies in its integration with VMware. Conventional storage arrays use iSCSI or Fibre Channel connectivity to present  LUNs (virtual disk drives) and rely on VMware’s VMFS and storage APIs for feature integration. Although the storage appears to be a conventional iSCSI LUN,  EvoStor uses a proprietary back-end protocol over Ethernet. They couple their back-end storage intelligence with the VMware hypervisor, linking data placement with the demands of virtual machines. 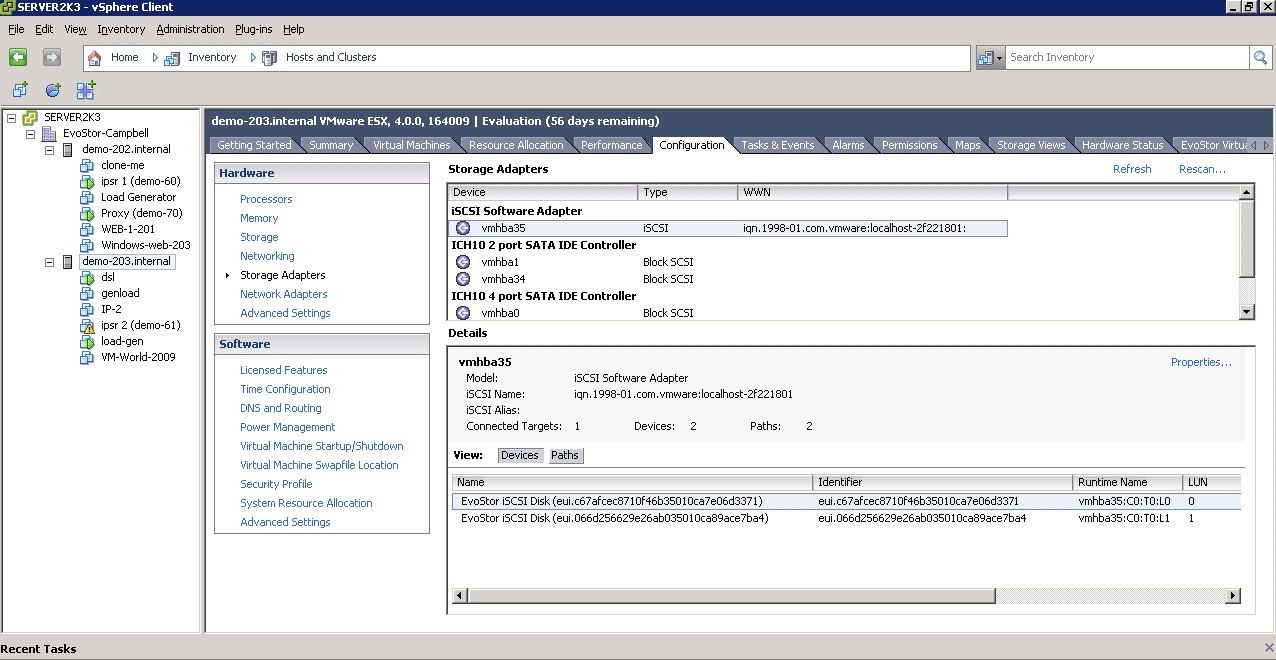 See those iSCSI LUNs? They're not really LUNs, and they don't really use iSCSI!

Although the product is still in development, this concept holds great promise. The company could enable per-virtual machine performance or availability SLAs, backing these up with automated  block-level storage tuning. A high-priority VM could be provisioned on flash with extra redundant copies, while a test machine could live on bulk SATA. Both would be thin-provisioned and could later be migrated on a granular basis to alternate tiers of storage as requirements changed.

Like Drobo, EvoStor is designed to automate powerful storage features and bring them to non-storage audiences. Interaction with the system is through vCenter and, although EvoStor-specific tabs are added, very little configuration and tuning is required. Storage is allocated and data placed automatically as virtual machines are added and the system promises to keep everything running without end-user input. Also like Drobo (and EqualLogic, LeftHand, and many others), EvoStor can be expanded simply by adding additional storage nodes, with each integrated into the existing environment. 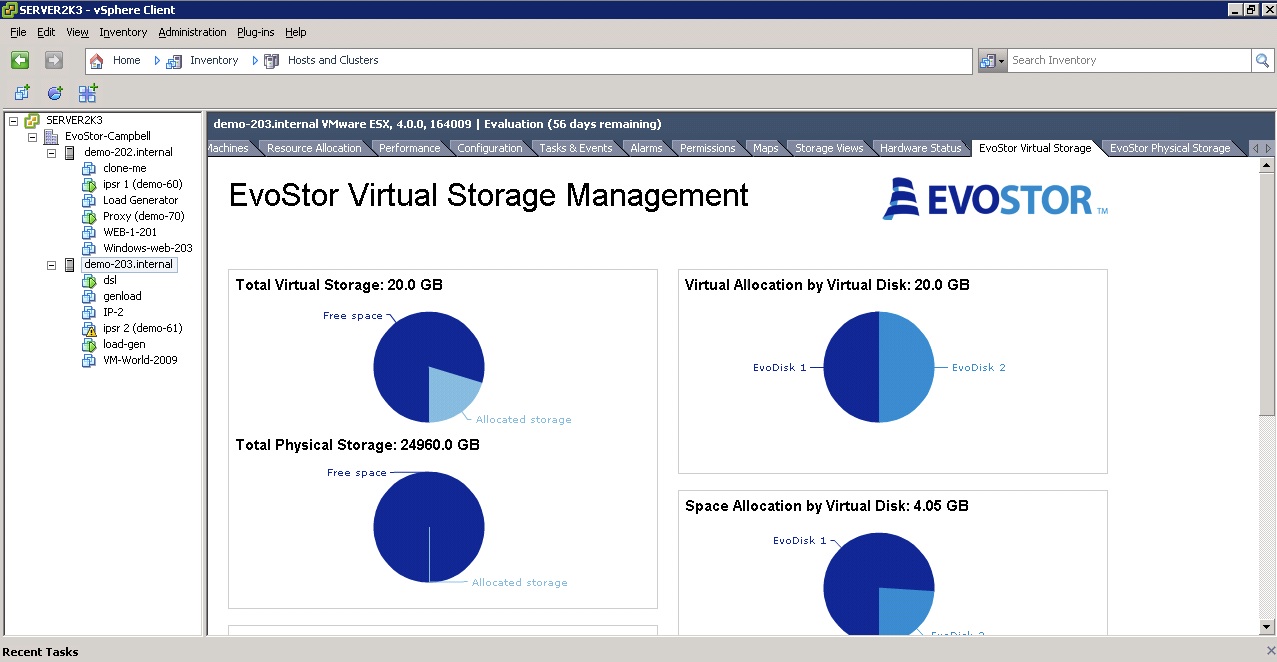 Achieving this kind of lights-out automation  with conventional SAN storage is challenging. As VMware’s own Jon Bock told me at VMworld, the vStorage APIs are still appearing, evolving, and maturing. Virtual machine awareness currently requires information that just isn’t available to storage arrays. Instead, they take a shot in the dark, using what little information they have to divine performance requirements. Active blocks of any sort are moved to high-performance storage, while less-active data is migrated down. But they have no ability to logically group capacity below the LUN level in order to offer more advanced availability or reliability services.

One must approach the claims of any startup with skepticism, and this is especially true of one which has not yet shipped a product. But EvoStor’s concept is sound, and it lays out an exciting direction for storage to evolve. The key is in the company’s focus on what their target market needs, not just what their technology is (theoretically) capable of. EvoStor promises that their product will ship early next year.

This is the bottom line for me: Many VMware shops, especially smaller ones, have no history of specialized storage know-how and want something that just works. But VMware ESX has a nasty habit of pounding low-end storage systems with random I/O. VMware users in the midsize market need a storage solution that is integrated into the VMware experience, expands effortlessly, and self-tunes, and this is precisely what EvoStor is promising. I look forward to putting the product through its paces once it is out of the garage and generally available!