Although CES is traditionally a consumer show, we often see announcements there that are relevant in enterprise IT as well. That was certainly the case with two big CPU announcements from Intel and AMD this week. We discuss these stories and more on this week’s Rundown.

Kyoto University suffered from a huge data loss back in December. An errant update cause around 77TB of research data to be deleted over the course of two days. The ultimate root cause was a software update from HPE that caused a script to go off-script and start deleting 34 million files. HPE published a letter of apology and took full responsibility for the issue. Kyoto University said it has scrapped the backup system and is currently searching for a new solution.

If you’re into retro mobile devices, you’re probably shedding a tear this week. BlackBerry devices have finally gone dark on January 4th. The storied company said that any legacy devices running BlackBerry OS 7.1, 10, or the table OS will no longer be able to send messages, emails, or even make calls.The costs to maintain the legacy server infrastructure have finally eclipsed the revenue from the dwindling use base. BlackBerry had already frame doubt manufacturing of the hardware to third-parties and focused efforts to keep their users on the platform. The migration paths available are listed on the BlackBerry site but amount to “get a new device”.

Read more: BlackBerry will die on January 4th — for real this time

When you hear the name Intel you probably think CPUs. But Intel makes many other things, from autonomous driving systems to networking gear to Optane persistent memory. One thing they no longer make is flash storage, since the computing giant just finalized their deal with Korea’s SK Hynix to spin out the NAND flash SSD business.

Exchange Doesn’t Like Deuces | 9:46
New Year’s Day was not a fun time for Exchange admins. Shortly after midnight, Microsoft’s flagship email server started throwing up an error in the FIP-FS antivirus scanning engine that was unable to interpret the date due to a 32-bit integer overflow. This caused mail to pile up in the transfer queues and be undeliverable. Microsoft quickly issued a temporary PowerShell fix to get the mail flushed and soon afterward issued a permanent patch to fix the overflow.

One of the upstart data storage companies making news is WEKA, which just announced a big funding round. Founded back in 2014, WEKA built a massively scalable and high-performance NAS platform that’s gaining traction in technical computing and AI. The company has doubled its funding and is bringing in new leadership to take it to the next level.

Although CES is traditionally a consumer show, we often see announcements there that are relevant in enterprise IT as well. That was certainly the case with two big CPU announcements from Intel and AMD this week. First up, let’s look at Intel, which replaced their entire lineup of desktop and mobile CPUs with a new 12th generation. Called Alder Lake, the centerpiece is the new performance/efficiency architecture which mixes core types in a single chip. It also includes a new GPU, PCIe 5, DDR5, and more.

Then there was AMD, which has been cranking out awesome desktop and server CPUs based on their Zen architecture for years. CES saw AMD’s new Rembrandt mobile offerings but more importantly gave us a glimpse of the next generation Zen core, which is expected later this year. 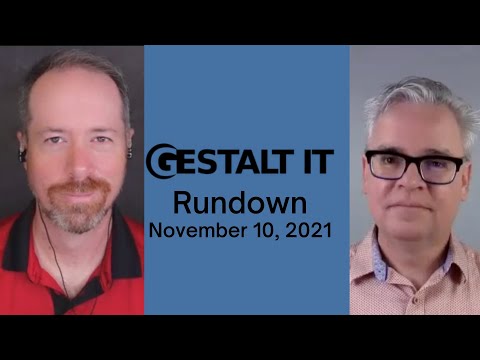