When I look at the Unified Computing Systems from Cisco, I get overwhelmed by the targeted marketing. It’s kind of creepy how the package is put together to be just enough different to have a strong marketing message. And handle any objections you might have to buying it.

What is a surprise, is that Cisco has moved into the Server market. The convention has been that Intel server market was saturated, with reasonable profit margins and a cosy competition between Dell / HP and maybe even IBM.

Leverage what you are good at, and steal someone else’s ideas

Obviously, Cisco is good at networking and ethernet. So they developed some networking and made the Nexus 5000, 2000 and CNA adapters to produce a Top of Rack networking ecosystem. That’s an easy thing to do and has a great marketing pitch. How so ? Easy. It’s the same story that Infiniband has been putting around for the last ten years. Better management, ease of use and administration blah blah. Lets take the Infiniband goodness, do it on Ethernet and, voila, customers can understand Top of Rack networking. None of that “new” technology around here, give me ethernet. (Lets pretend that this DCB ethernet is _really_ “good old Ethernet” even though it’s a long way from the original Ethernet standard).

Cisco hasn’t been able to shake Brocade from it’s number one position, so they sent a team of engineers out to form a company to build Fibrechannel over Ethernet. Give a bunch of cash, no corporate interference and you get … Nuova Systems. Buy them back after two and half years and you’ve got yourself a “new” technology that bridges all those FibreChannel networks into your core competency. AND you take out the number one competitor at the same time. Awesome leverage of what you are good at.

Oh, and FCoE has been in the works for years. No one was much interested in actually spending money until Cisco decided to “leverage” it.

But we need more. We need a little magic on the motherboard. Gluing Intel chips to a motherboard isn’t going to make a good story to those server geeks who care about Northbridge chipsets, front side bus and memory access rates. They aren’t going to change vendors unless we have a little something for them. Cisco did a little deal with Intel, who rummaged around in their drawer of unfinished toys and produced the ‘memory doubler’ and some fancy new I/O chips. Maybe Cisco promised to buy some more Intel i960 chips to put into some networking gear in return. Whatever. Pure ‘unobtainium’. Perfect.

What’s missing ? Of course, the pitch to the “business man”. You see, you aren’t going to get 30% market share in a short period of time by relying on geeks to change vendors. The corporate emphasis on risk reduction and change management means most geeks can’t face the paperwork for change.

And that’s called selling from the bottom up. You have to have a story that sells from the management down as well. The story that you pitch to CIO so that he heads on down to the geeks and says “We need to look at some of that Cisco servers, why aren’t we looking at them”, or, at the very least, “I’ve heard good things about Cisco servers, we can try them out” – which means some risk and change is possible.

That’s easy, we wrap some management software that makes it look like you are “in control” or “lower the deployment” cycle, or “reduce operational costs”. The best part of this software is that it can be a “Powerpoint release”, it doesn’t have to be real.

What ? Is that a bit harsh ? OK, so when was the last time you had a “management platform” that really worked ? Uh huh, Not so much. Most likely you are still looking to replace what you already have. Check out Cisco CS-MARS, or HP Openview, or BMC Patrol for background data.

The last thing that Cisco put into those servers was a bit of BIOS magic. No one normally wants to change much in the server platform, there is no money in it. But Cisco made their servers stateless. Optional feature to be sure, but you can load the BIOS, MAC Address, WWN etc etc from a central server. That’s very different. 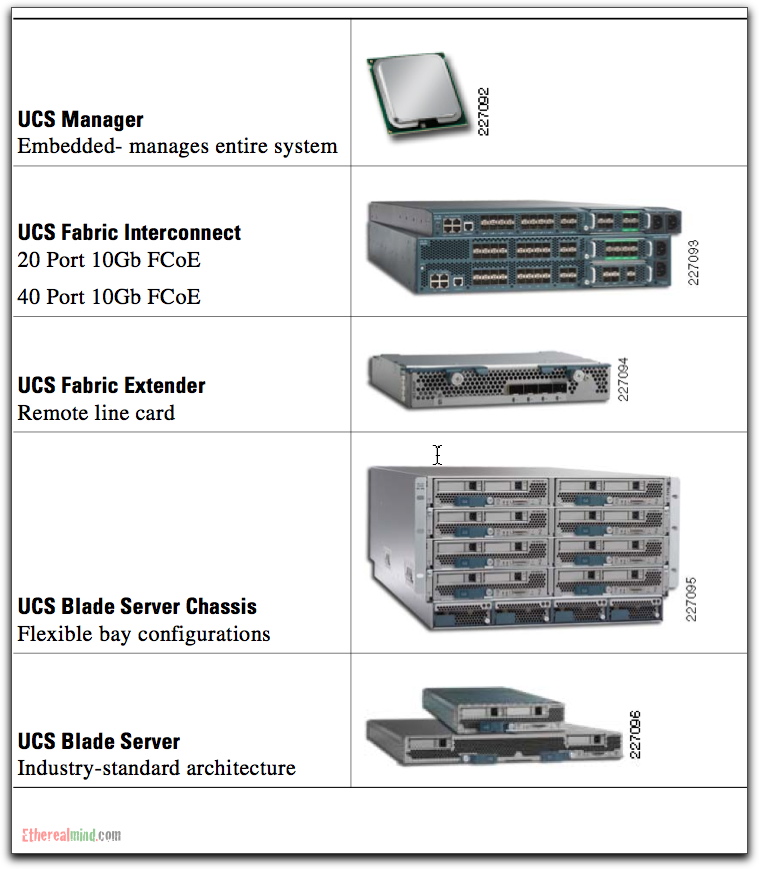 So when I look at the Cisco UCS server strategy, I don’t see too much innovation. I see some cynical marketing that allows Cisco to make a good pitch to customers. Every feature is carefully targeted to “manage your buying objections” and get the sale. Too much innovation would scare the customers away or create uncertainty but enough innovation to get good differentiation and give your entrance into an existing market a good chance to succeed. You can bet that Cisco has a carefully crafted answer for every question you ask them so that they can close the deal.

With that said, I like Cisco UCS strategy very much. It looks to me like the first visible innovation in Server Hardware in five years or more. Instead of racing to bottom for the cheapest price to glue Intel chips on a motherboard, Cisco is attempting to move into the high end of the market. To open that market against HP and IBM requires more than just competing. Cisco MUST be different.

Even better, Cisco is only moving into the high end Data Centres. That leaves them the low end for later, when they want revenue or volume growth. The shareholders will like those numbers.

What I also find interesting is that Cisco continues to “double down” on the strategy. They spent USD$250 million to buy Nuova (after they VC funded it as a startup with Cisco engineers). They’ve spent USD$250 million on the joint marketing venture with EMC / VMware. And probably spent the same amount again building the internal organisation, startup marketing and hiring headcount. Add the same again to get production and manufacturing costs before a single sale is made. This will help to get some big deals done so that the sales people can point out how successful they have been. This is vital to crossing the chasm so that mainstream corporates will start to buy UCS.

And UCS has some excellent features for administration and the management tools might actually deliver results and changes to the industry in the near future. The integration with VMware, especially Nexus 1000, provides a lot of functionality that is needed for large scale build outs.

But the product is very carefully designed, feature selected, just-enough-innovation and features to make you think about the product and seriously consider it. Even the grey colour is selected to be non offensive.