If data holds the true value of an organization, and the ability to access it dynamically is a competitive edge, then our view towards how this should be able to take place needs to mature.

In addition, our need to run analytics against our data is one of the most important aspects of our capital. Western Digital has a vision that makes sense and it should be taken into account.

A Bit of History

Western Digital, an organization with over 70,000 employees and over $20 billion of annual revenue, has been in the data storage world since 1970, surely well before the PC became an everyday device. In the beginning, this company started making its stake by selling chips primarily used in calculators, and by 1975, they were the largest independent chipmaker in the world.

By 1976, they acquired the patent for the first disk array subsystem, which was the foundation of the modern-day SAN/NAS architectures, as well as announcing the FD1771, the first commercially available floppy disc controller.

By 1982, Western Digital released the first “Single-Chip” Western Digital hard drive controller. And by 1988, along with SanDisk, the first “System Flash” device was created, such that portable devices did not rely on a spinning disc, but a precursor to solid state allowed for data storage became a viable solution, particularly for small battery-operated devices.

As you can see, this key industry player became a huge part of how data storage began and will continue to push the envelope well into the future.

At Storage Field Day 18 we were given a glimpse into some of these innovations into how these will continue to evolve, and with Narayan Venkat’s (Western Digital’s VP of DCS Business) descriptions of how the data will flow, varying categories of data, and what WD envisions the environment changing to allow for these new paradigms to happen. 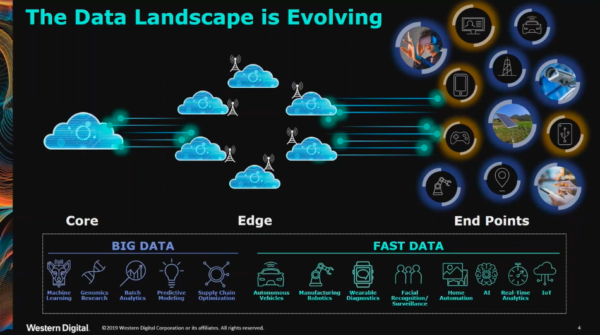 Western Digital envisions the major categories of “Edge,” “Core,” and “Endpoint” as three specific distinctions of data. The presentation that Narayan gave talked about each, and where WD sees themselves in those critical footprints. The acquisition of SanDisk, Tegile, and others have given the portfolio a strong IP in each of these categories. The important thing to keep in mind is that having a focus on the entire data-stack, including spinning disc, solid-state, NAND, and even 3D NAND (now up to 96 layers), as well as disc array, and controller needs to be corralled into one global vision. We see many categories such as Internet of Things, short-term location, long-term storage, and backup as categorically different, yet equally important considerations. Western Digital has these aspects in mind, and the full Storage Field Day presentations given clarified much of this vision.

Western Digital has a vision of the entire stack of technologies regarding how this should be leveraged as newer approaches to where and how data is stored, how that data flows into the environment, and pushing that vision throughout the stack. Narayan is a veteran of the storage world and was brought into the WD fold by the acquisition of Tegile. He is an industry leader in the data array platform, and in his video here, he talked about the history, future, and Western Digital’s vision to solve problems to come within that future.

In a way, this is less about an individual product than a portfolio of products that are bound together with a focus on integration and will enable enterprises to place solutions where they need to be. This makes it so that the unique requirements of speed and density interconnect, while the critical aspects of endurance, stability, and security can be integrated into a full vision. Leveraging the concept of Silicon-to-system, from the chip wafer all the way up the stack to disc array, with a focus not just on hardware but software will allow for these emerging paradigms of how data is generated, how it flows, how it’s protected and retained will make this work. Technologies like the high-density 3D NAND, NVMe, and existing (yet still innovating) spinning disk will play into this new-world dynamic.

We understand that each data-flow and category will face different challenges to the requirements of the data-center, and we do believe that each deserves its own consideration. Western Digital, in its overall vision, has provided key guidance to how these concerns can be handled. It seems clear that these new challenges and Western Digital’s overall vision of how to approach them, as outlined in these presentations, will create an environment that will provide a platform allowing customers to face these challenges.