Application Performance Management would seemingly be a self-explanatory exercise. And perhaps in the days of when monolithic applications weren’t just the norm but virtually the only option, perhaps it was an easier task for IT. But the currently complex application landscape, with intertwined microservices, containerized applications, rapid CI/CD updates, and a bevy of different code languages makes diagnosing applications, even when seemingly running well, a challenge. Now add in that organizations are utilizing hybrid IT, with some apps on-prem, some in the cloud, and many spanning the two to the mix, and the problem facing IT is profound.

SolarWinds provides an interesting triune approach to APM, with a suite of apps that include Pingdom, AppOptics, and Loggly. While this triumvirate of services all work together to provide a way for organizations to monitor and manage hybrid infrastructure, their underlying philosophies require some reflection. Obviously they all do different things, that is a given. But the approach they take to how an application works and what it means for an application to be working is profoundly different.

The App As Social Being – Pingdom

We’ve written an overview of Pingdom on Gestalt IT a while ago. But as a way of summing up, Pingdom (aside from driving my autocorrect crazy) provides visibility into web apps and user experience. In this formulation, the only concern of the application is how it is experienced in the world. The code, infrastructure, and other considerations are abstracted down to how the user will interact with it.

We’ve seen this in wireless networking with client-side monitoring, and the intent is largely the same. They both recognize the fundamental truth that from a customer perspective, the only concern they have is how they interact with an organization. In the case of Pingdom, it specifically looks at the often complex user interactions on a web app. This involves both synthetic and real user monitoring but more importantly correlating the performance of the web app with the desired business outcome.

The App As Psychological Being – AppOptics 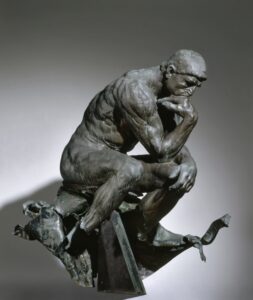 Of course, it is one issue to know that a user is experiencing an app in a positive way and leading to desired business outcomes. And it’s important to know if that is not happening. But once that is detected, you also need visibility into the internal state of the app. That’s where AppOptics comes into play.

My colleague Tom Hollingsworth recently did a deep dive into AppOptics, and it digs deep into the services that compose the application to find out what’s actually going on when users run complicated queries or connect to a node that is having some performance issues. It gives visibility into the internal life of the app, going as far as seeing into the server or the very code itself. With this, it can detect bottlenecks from across different interconnected services, ultimately providing a full-stack view of all of an app’s intricacies.

The App As Historical Being – Loggly

History is not composed of an exact recounting of the past. Instead, it is the use of written, material, and living sources to construct an understanding of the past, which is necessarily an interpretive act. Especially as we move into modern history, one of the challenges isn’t having insufficient primary sources to draw on, rather it’s how to select from the surfeit available. Reviewing the bevy of system and application logs can feel like the same problem.

Loggly provides a hosted full-stack, multi-source, log management solution. The key to this is being able to ingest from essentially any source your application can effectively provide. But also important is the ability to operate at scale, as much as the march of history, the log output of apps will only grow more complex with time. This scale allows for effective search no matter what kinds of dataset you’re looking at, but also to do advanced pattern recognition. And logically it integrates this back into AppOptics, combining metrics, traces, and logs to help with troubleshooting.

Ultimately, this approach from SolarWinds bellies the sophistication of the modern app landscape. As part of the company’s mission, it’s created a set of tools to illuminate the relevant faucets of applications in a way that’s relevant to IT pros. It starts with understanding how users are experiencing them, then digs into their internal state, while finding a way to make use of an app’s vast historical output. While apps may be increasingly complex creatures, SolarWinds shows that an APN suite doesn’t have to be.