I grew up on a farm. I’ve milked cows and planted all kinds of crops. I’ve been chased out of henhouses by roosters and charged by bulls. It was a humble beginning for an IT engineer but it taught me a few important life lessons. It also left me with a sense of history too. For example, how big is an acre?

If you use the textbook definition, it’s an area of land that is 660 feet by 66 feet totaling 43,560 square feet. Like all imperial measurements, we arrived at that exact number more by happenstance than math. Fields used to be plowed with an ox. The ox dragged a heavy plow across the ground to break it up. The distance the ox could pull that plow in a straight line without needing to rest became known as a furlong. The number of furlongs one ox could plow in one day became the width of a surveyor’s chain. One furlong (660 feet) times one chain (66 feet) became the standard definition of an acre! 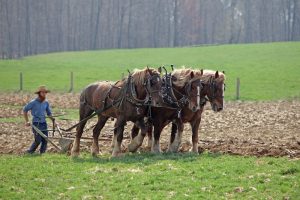 Today, farms are way bigger than just an acre of two. Commercial farmers rely on technology like tractors, irrigation systems, harvesting equipment, and teams of people to increase their crop yields. Modern society wouldn’t be able to exist without the help of agriculture technology. We’ve come a long way since the ox on the acre.

How does this relate to technology on the IT side of the house? Well, the first time I got to take a look at AirMagnet was almost a decade ago. What’s happened since then?

And those are just the highlights! The world of wireless has changed significantly in the past decade. More importantly, the way we design and build wireless networks has changed as well. The tools we use to build them have also had to change. Companies like Ekahau and IBWave were smaller back in the day and adapted to the new standards and methods quickly. AirMagnet, on the other hand, lagged behind in development and was bounced around as the assets of Fluke Networks were acquired, spun out, and shelved. The future of the former king of the wireless design world didn’t look good at all.

Allies to the Rescue

Honestly, the best thing that could have ever happened to AirMagnet was a divorce of sorts. Last year, the wireless parts of Netscout were spun out into separate company that became known as NetAlly. In the past year since their official launch, they’ve doubled down on the tools that make them an industry name. Everyone knows about the AirCheck or the EtherScope nXG. But during Mobility Field Day 5, NetAlly had a big comeback reveal for the delegates.

AirMagnet is back! More specifically, NetAlly has updated AirMagnet Survey Pro to version 10 and added new features that are important to wireless pros. First and foremost, they have added support for the newest wireless technologies. Building a survey for a new building that wants to use 802.11ax APs with support for 6GHz down the road? AirMagnet can handle that! Using new antennas to cover hallways? You can add those new antenna patterns and build them into your map.

The biggest change in my mind, though, is the ability to leverage other tools. Remember how I told you that almost everyone knows about the AirCheck and EtherScope? Those are tools that companies and professionals invest in because they work and they help us do our jobs better. But if we only use them when things go wrong, are we getting our money’s worth out of them? Likewise, if these powerful tools are capable of recording information about the wireless network for troubleshooting purposes, why can’t we use that information in other ways?

NetAlly has built AirMagnet Survey Pro 10 in such a way that can import data from both the AirCheck and the EtherScope! This means that you can have a junior technician or two walking around your environment gathering data with these handheld tools without the need to haul around bulky laptops. They can take measurements in critical places and bring that data back to you so you can import it and start to build a more complete picture of what your wireless environment looks like. Maybe you’re just upgrading one section. Perhaps you’re looking to create more robust connectivity in a specific high-traffic area. You can now gather that data without needing to leave your office thanks to the tool integration that NetAlly has built.

I would never dream of trying to plant a cornfield with an ox today. There’s no way that I could do the job without modern technology in the way that the job needs to be done. Likewise, when I want to design a wireless network to modern specifications with Wi-Fi 6 support, and soon to be Wi-Fi 6E support, I need tools that are the latest and greatest. Prior to Mobility Field Day 5, I wouldn’t have thought to pick AirMagnet Survey Pro. It was sliding away from relevance. But thanks to the care and attention it has gotten from the NetAlly team, AirMagnet is ready to jump back into the fray and help us get the most from our wireless surveys.

For more information about AirMagnet Survey Pro and the other tools from NetAlly, make sure to check out their website at http://NetAlly.com