In case you were wondering, Cisco isn’t playing games with the Unified Computing System. Their aim is to take on IBM, HP, and Dell and become a major player in the data center server market.

Not Your Father’s Cisco

Some might think this is a no-brainer after Cisco’s March introduction of their “Project California” UCS line. But much of the discussion and coverage at that time centered on the question of whether the UCS hardware was really a play for dominance or merely an extension of Cisco’s network leadership. Specifically, the initial UCS hardware was only available in a blade form factor and was introduced with much focus on running virtualization software from VMware and Microsoft. Many concluded that, although UCS was debatably innovative in the server space, it would remain a niche product.

But Cisco wiped away any doubt at their June 2009 Partner summit: They’re not just producing a blade server for large virtualization environments.  UCS is a full line of servers in a variety of form factors aimed at all data center server workloads. On Tuesday, two shots were fired. First, Cisco’s Omar Sultan came right out and staked the claim:  UCS is not just for virtualization. Then Cisco announced a new line of UCS servers, the  rack-mount  C-Series. 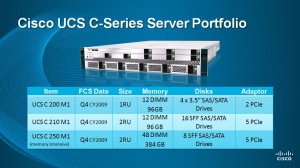 The C-Series servers are important more for what they represent than for the specifics of the three models announced. While the B-Series blade servers were huge, expensive, and especially appropriate in the largest enterprise virtualization environments, the new C-Series makes sense anywhere in the data center. They start very small, with the entry-level C 200 M1 sporting just two CPUs, four 3.5″ hard drives, and 2 PCIe adapters in a one RU format. Pricing has not yet been announced, but expect these to compete with the higher-end enterprise server lines from IBM, HP, and Dell.

Step up to the 2 RU C 210 or C 250 and you get greater scalability in terms of drives or memory, respectively. These new systems nicely bridge the gap below the market for more expensive and scalable blade servers like the B-Series UCS systems previously announced. All of the UCS server models feature similar features and can be integrated into the new unified computing environment envisioned by Cisco, centered around 10 Gb datacenter-class Ethernet.

That’s the multi-billion dollar question. There must have been some interesting discussions within Cisco on whether or not to take on the server-space titans, alienating these potential partners and risking sales. Undoubtedly, the revenue  potential  from  entering the $85 billion data center server market proved too tempting. Plus, those vendors, especially HP, have been making waves in Cisco’s core market of enterprise networking.

Cisco is expected to bring in $36 billion in revenue in 2009, down from $38 billion in 2008, and must make bold moves to move that number higher. Taking $20 billion in data center server sales over the next two or three years is a very good way to accomplish this!