Pure Storage is known for their innovative all-flash storage arrays. Founded in 2009, they were pioneers of the all-flash storage industry. In 2016, they introduced their FlashBlade line. FlashBlade is an all-flash unified fast file and object data (UFFO) platform that is designed for workloads that make use of unstructured data.

FlashBlade is an excellent choice for scale-out workloads because it’s an all-flash array. This provides high performance for file and object storage as well as scale-out for unstructured workloads. And now Pure has made significant updates to this offering.

Before we get to the updates, let’s discuss how we got to this point. From the beginning, Pure decided that they wanted to own their own destiny. Pure not only develops the software for FlashBlades, but they also developed their own flash modules. The Pure FlashBlade blades are a tightly contained unit made up of controller components (CPU, memory, NVRAM, etc.) and NAND. If something goes wrong with one component, you pull the entire blade and replace it with a new one. This is, even if there is a problem with the CPU, but the NAND part of the blade is working fine.

Pure co-develops the hardware and software so that they can make use of all the innovations they are designing. This reminds me of Sun hardware and Solaris, another proof-point of the cyclical nature of our industry.

Pure has delivered several impressive innovations. They were one of the first vendors to build an all-flash scale-out storage array. Other vendors only used flash for a cache tier for their spinning disks.

This is the FlashBlade innovation timeline since the release in 2017.

The Architectural History of FlashBlade

In five years, the FlashBlade family has gone from offering a single fifteen slot chassis with 8TB blades to supporting up to ten chassis, with each chassis having up 15 52TB blades.

FlashBlade unifies fast file and object storage data, and yet there are no gateways required. This is because both file and object sit on the same key value store. This is an important thing because the semantics of either system are completely available.

Fast file has been used for HPC workloads, but people tend to think object storage is best suited for archive data. However, people building modern cloud-like apps use cloud native constructs, like simple API puts and gets. The preferred architecture seems to be S3 and other object storage offerings.

Pure customers like using all-flash for backups, because of the fast restore times. Another cool feature FlashBlades have is immutable snapshots. With this feature no one can erase data – not even an administrator! Customers must call Pure Support with the right information to delete data if they use immutable snapshots. This sounds like a great tool for fighting ransomware.

Pure announced FlashBlade//S at their Pure//Accelerate techfest 22 event on June 8. The S stands for speed, simplicity, scalability, and sustainability. The hardware is the next generation of all-flash hardware, and the software is the next version of the Purity software.

There are two arrays: S200 and S500. The S500 has more compute sockets and performance per TB, but the S200 is still a workhorse, and delivers more than two times the performance that the current version of FlashBlade can deliver.

The FlashBlade //S chassis is a bit different from the current FlashBlade line-up, and when you line the stats up you can really see how these new versions are capable of such a huge improvement.

One big architectural difference with the new FlashBlade S series is that the all-QLC flash units are disaggregated. What this means is that a single blade can hold four flash modules. Each module can be 28 TB or 48 TB, and Pure plans to grow that capacity rapidly. A fully loaded FlashBlade array will have 2 PB raw capacity – the lowest configuration allowed is seven blades with one 24 TB flash module per blade.

Here’s a look at the Chassis:

Now that the architecture is so modularized, the CPUs, the flash modules, and the networking each can be upgraded independently. Why is this a big deal? If Intel continues its innovation wave, that means these arrays can easily be upgraded to take advantage of new and improved CPUs. Also, Pure intends to rapidly improve the density of its own flash modules going forward. And networking will always have innovations in the future. FlashBlades can add any of these innovations with no downtime at all.

Sure, there is fresh marketing and a snazzy new bevel, but this isn’t just another incremental upgrade announcement. The platform is radically improved. It has over two times the density, scale-out, and performance of the previous platform. And it will provide better performance per RU, Watt, and TB than other popular platforms.

This is also something Pure has been building towards. They’ve believed that if they make flash part of the entire system, they’ll be able to innovate faster for their customers.

If you’re subscribed to Evergreen Gold, you’ll never worry about upgrading. But you will have to learn the new name: Evergreen//Forever

What About the Software?

There is also an updated version of the Purity FB software. This version was developed for the new FlashBlade. Because Pure doesn’t believe in fork-lift upgrades, so this latest version also provides all the functionality of the previous version.

The software continues to remove storage management complexity. This is important because if storage administrators must deal with complexity, they are blocked from working on more important things or worse, they make mistakes.

FlashBlade already handles next-gen solutions, but this upgrade can handle even more of those. This is because the increased capacity and performance opens more doors to new workloads. In fact, unstructured data has infinite possibilities for custom and new workloads, if there is a platform to support them.

Environmental, social, and governance (ESG) criteria are important to most companies today. Power to a rack and power at the datacenter scale become a particularly important consideration when you have rows and rows of racks cranking away at a big data or AI problem. An important metric these organizations track is IOPs or TB per watt.

The new FlashBlade//S series is a leap into the future for UFFO. This isn’t your normal new product release; this is a jump into the future of building architecture for modern applications that require lots of data and performance to match. 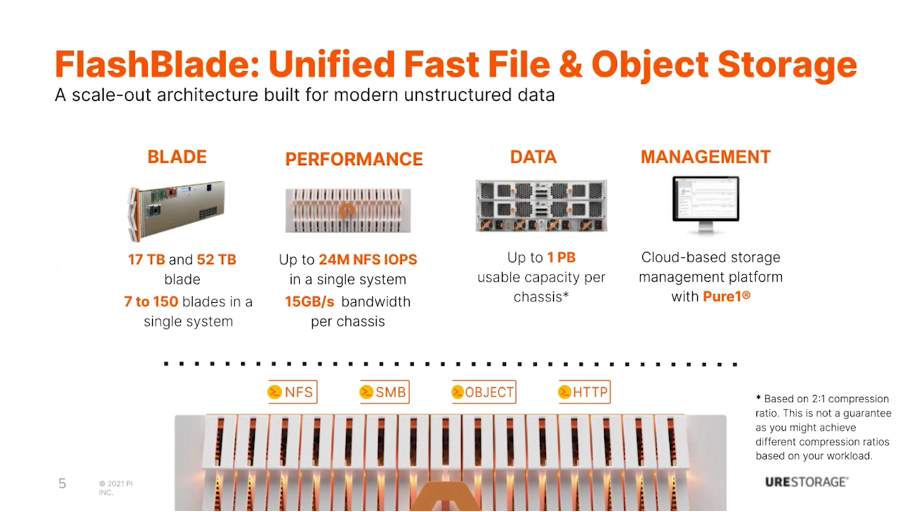 Gina is the Founder of Digital Sunshine Solutions, a consulting firm that helps companies with product marketing strategy, as well as tackling the issue of digital literacy. She’s an EMC, Dell, and VMware alum (along with a few startups!), and a vExpert.