NVMe is the future for how the datacenter will grow. I was fortunate to participate in a presentation with Dr. J. Metz, which I wrote about here. In it, we discussed the protocols required by this new aggregate platform, and the values that advanced technologies built on NVMe will bring to the datacenter.

Pure Storage has accomplished some very interesting things in its relatively short history. Their FlashArray//X, as of 2018, is an all-NVMe portfolio of arrays, that works as a high-speed block device with minimal latency.

The Road to RoCE

Pure Storage’s FlashBlade does similar things with the ability to add storage on a blade methodology, which also increases the CPU functionality with each blade added. The file and object based FlashBlade coupled with FlashArray gives users the ability to store block, object or file-based data with ease and efficiency. 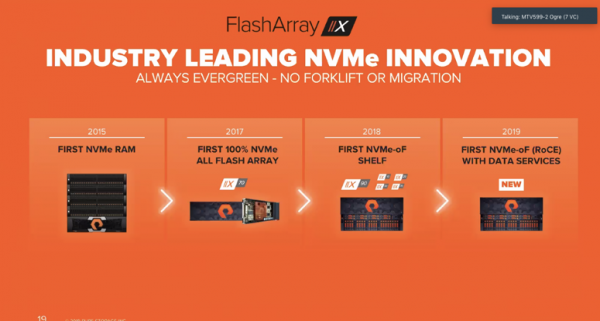 Pure Storage has turned their attention to innovation that tackles Direct Attached Storage (DAS) architectures. Most recently in the data center, DAS has been used for things like scale-out, cloud-native databases. The disk or even flash storage is sitting in the server and not connected via some fabric. This has given the benefit of speed for the database, but also brought along distinct problems, particularly in terms of scale, efficiency and management complexity. As the size of the database grew, we knew how to grow the compute layers – simply add new servers. However, as storage needs grew, we found it difficult to grow the storage. There were only so many disks we could add to the environment without adding more compute, leading to stranded resources. This also causes fragmentation of the database. As a result, we were forced to use either SAN or NAS to grow the databases. This brought storage fabrics into the equation. Storage fabrics, however, add the additional problem of throughput. Suddenly, the performance of the database dropped as the separation of compute and storage added significant latency in the infrastructure. Companies were forced to increase the speed of the disk, the fabric, and even the compute to keep up with the performance previously held by the DAS model. This tradeoff has been a key problem since the data center and larger databases clashed.

In an effort to ameliorate this, Pure Storage has arrived at the concept of DirectFlash. DirectFlash leverages the power of NVMe SSDs and NVMe-oF by creating a solution that allows for significant IO required as well as much greater fabric throughput. DirectFlash Fabric provides the lower latency required between the server side and storage array to solve the performance and scalability issues of today’s larger and more high-velocity application needs. Additionally, NVMe-oF provides increased CPU utilization with RDMA offload (tested by Pure up to 25% improvement), resulting in either greater compute availability to applications, or a reduced number of servers required, as illustrated in the example below.

Reference architectures have been tested that show just how efficient and scalable this solution can be. Cisco UCS blade servers augmented by Pure Storage FlashArray with DirectFlash Fabric allow for pre-packaged end-to-end NVMe converged infrastructure for web-scale and cloud-native applications that can be grown incrementally as workloads increase. This helps alleviate concerns from the above examples of CPU and storage capacity growing at wildly differing rates depending on your application.

The adoption of NVMe flash allows for far greater densities of storage per array, with storage not being hindered in the pursuit of scale. And the greater scalability of NVMe-oF allows users to grow that connectivity without worrying about the concerns of a fiber infrastructure or the packet limitation inherent in Ethernet. Truly, we’re embarking on a wonderful solution set for the requirements of enterprise as well as web-scale databases and data performance, with the scalability requisite for the future. Pure Storage is leading the way when it comes to solving storage problems across the board and helping us usher in the future of storage with NVMe.