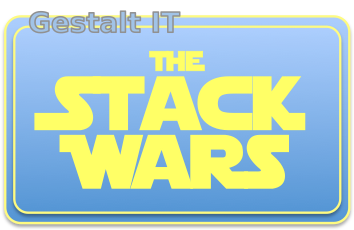 Just as public cloud computing is beginning to catch on, the enterprise data center world has been shaken up by the biggest IT product vendors. Rather than sit back and watch their wares commoditized, companies like Cisco, EMC, HP, and now HDS are stepping up to the plate with integrated “stacks” that include server, storage, networking, and management software. The next-layer players, VMware and Microsoft in particular, are joining hands, too, eager to support these stacks.

But what does this all mean to enterprise IT? Who benefits from these vertically-integrated stacks? Who stands to lose out? To paraphrase the wise Jedi master, Yoda, “cloudy, the future is.” So, the stack wars have begun!

The largest IT infrastructure vendors are aligning their own products and joining together in alliances to create vertically-integrated “datacenter in a box” stacks that include server, storage, networking, and higher-level software for virtualization and management. Cisco and EMC are certainly at the forefront of this development with their Acadia VCE vBlock, as demonstrated and deconstructed at our Tech Field Day earlier this month. The reinvigorated HP has its own offering in this space, and is unique in its ability to use all in-house hardware, and IBM and Oracle/Sun are serious challengers. Today, Hitachi announced their own Unified Compute Platform as well.

The battle of the stacks extends upward into software as well. Although VMware and Microsoft (and don’t forget Citrix) are quick to point out that they can run on anyone’s hardware stack, they are being pulled into the war through alliances, ownership, and old feuds. VMware forms the “V” in the Cisco/EMC “VCE” stack, though they also linked up with Cisco and NetApp in February. HP and Microsoft signed an even bigger agreement in January, suggesting that Hyper-V is their preferred virtualization solution. Hitachi’s UCP digs deep into the Microsoft solution set and mixes in home-grown software to do everyone else one better. But perhaps it will be Oracle/Sun who will deliver a real software-focused stack, given Oracle’s historical focus.

All of these stacks have a few things in common:

Although all of these stacks include software components, it is interesting to note that it is the hardware guys who are in the driver’s seat. Microsoft and VMware are surely wary of tying up too closely with any one server or storage vendor, lest they lose the ability to compete in other environments. One expects these two to announce partnerships across a few hardware stacks, though it is unlikely that they will both fully integrate with every offering.

When it comes to stack hardware, only HP has a complete solution, having recently acquired 3COM, LeftHand, and Ibrix. IBM, Dell, and Oracle are thin on networking technology, though their storage story is stronger than many give them credit for. EMC clearly lacks the server and networking components and so tied up with a complementary Cisco who is strong in both areas. Then there is Hitachi, with a solid reputation in storage and strong but relatively unknown blade server offering but no clarity on the networking side. Perhaps HDS is already on the phone with Xsigo, VirtenSys, or Arista?

Certainly, all of these hardware vendors would like to offer a complete solution. This leads one to assume that many of the smaller hardware companies will soon be acquired, since they cannot hope to offer their own stack. The networking and virtual I/O companies are especially juicy targets, but don’t count storage out either. One could certainly imagine Cisco picking up a storage company or two and leaving EMC at the altar! Compellent is undervalued right now, and 3PAR must look pretty good, too.

What doe these stacks have to do with that other megatrend in IT, cloud computing? There are two angles here:

It’s not immediately clear whether one, both, or neither of these arguments truly provides the impetus for these hardware stacks, but the vendors are all pushing them as cloud-ready. Certainly, the advent of cloud computing is a major factor.

This is only the beginning of the stack wars. I have asked the Gestalt IT authors and Tech Field Day delegates to weigh in on this subject, and expect to see a number of insightful pieces written on the topic in the coming weeks. I will continue covering the topic as well. Please consider subscribing to the Gestalt IT RSS feed or following @GestaltIT on Twitter to stay up to date on the latest developments. Thoughtful comments and responses are always welcome as well.