During the last Cisco Live US in San Diego, I was lucky to attend Tech Field Day Extra as a delegate and was able to listen to Fred Niehaus present on Wi-Fi 6 and the new Cisco Catalyst Access Points. If you have never gotten around to experience Fred in person, I highly recommend it! He brings such energy and it is truly an experience. And of course, being around since Aironet was not yet part of Cisco, he is an expert in all things wireless.

Starting with what is on the horizon for the new Wi-Fi generation, one of the first questions that comes to mind is what is the maximum speed, or did the range increase? Or it might be, why is it called Wi-Fi 6 and not 802.something? (More specifically 801.11ax).

Well, like many things, standards are good, but it might take some time to get passed. On one side we have IEEE defining standards so everything can work together. But, for example, when Cisco came out with PoE, there was no standard defined by IEEE yet, but that did not stop Cisco from setting the norm.

On the other side, you have the Wi-Fi Alliance, a nonprofit organization that promotes Wi-Fi technology. The Alliance certifies interoperability, which is good so different vendors play nicely together, but it does not set a standard. 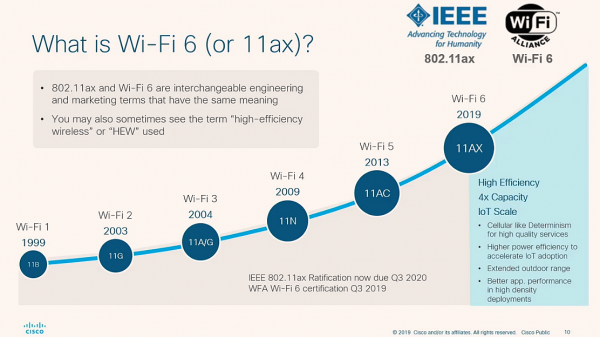 Now, business demands dictate the need for faster, more reliable Wi-Fi with lower latency. According to Cisco,1 by 2022 the average person living in the US will have 13.4 devices. And all of them want to be on the network!

Average number of devices and connections per capita:

One important question is, what does Wi-Fi 6 and Cisco’s Catalyst APs bring to the table to address this?

Let’s look at some key factors for Wi-Fi 6:

Sounds great, but I recall Fred in another session a few years back talking about QAM; it works well if you have no interferences – meaning here a direct line of sight. Which makes sense, since we are using phase and amplitude to point to a constellation. Reflections and delays from waves passing through different materials make it harder to decode. But 1024 QAM will be very efficient in high-density areas.

We already had this in the previous Wi-Fi generation (OFDM Orthogonal Frequency Division Multiplexing), but only for a single user transmission.

By portioning each radio channel into even smaller resources units (RUs) we can talk to numerous clients at the same time. Think of it as a one-lane road with big trucks carrying big loads. If there is congestion, everything comes to a halt until the road clears. OFDMA changes this in a way that we add a lane and put smaller trucks on the road. Now when there is congestion, traffic still flows.

But wait you might say, smaller trucks? Doesn’t that slow down my maximum speed? In a way it does, because the focus is on lower latency and typical consumption. Loading a webpage with multiple connections to numerous subsites, loading scripts, images, and all other content benefits greatly from quicker transmissions of smaller packets than one big transmission.

This will be great for IoT devices, as they usually only transmit small amounts of data. It will also increase battery life because the device can get to sleep mode faster.

There is one gotcha though. Remember when I talked about IEEE and the Wi-Fi Alliance? The pending IEEE standard gives the vendor the option to implement features, like OFDMA. It can be in the uplink or downlink, or both. The Wi-Fi Alliances mandates that OFDMA in the up and downlink must be implemented to be Wi-Fi 6 certified. Some early on the market APs can only do it on the downlink. This should not matter after standards have been ratified and the technology hits the main market, but for now, it is something to keep in mind.

In a nutshell, we color cells to make better use of transmission channels. If I have clients communicate on channel 6, they might have their power level all the way cranked up to be heard. This will cause a lot of noise on the channel and the AP might not be able to hear the other clients. By issuing a unique color, a device can easily distinguish transmissions coming from its AP from that of a neighboring AP. Now that a device is able to distinguish, it can ignore a neighboring AP transmission (not its color) when attempting to transmit. In addition, the AP can tell the client lower your power, I can hear you, and will talk to you.

This is a great improvement for IoT devices in terms of battery live. Devices can negotiate a policy when and how often they wake up to send and receive data, eliminating the need for a device to be always listening.

Let’s have a quick look at the below diagram listing key improvements for Wi-Fi 6: 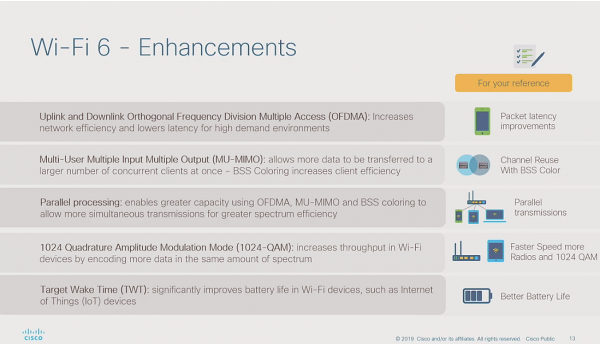 And consequently, the question is what can Cisco do with the new Catalyst 9100 series to help me meet my business needs? As it turns out quite a lot, especially the Catalyst 9120 Access Point.

One benefit, in case you are upgrading from older APs and have some older PoE switches, it can run on a mere 15.4 Watts (PoE). For all features you will need PoE+ (30 Watts), but the AP will work on PoE only.

It has four connectors for antennas. You can use a dart connector to add 4 additional external antennas for more flexible deployments. (Think of pointing one 4x antenna array down aisle A and another 4x array down aisle B at a warehouse for example).

It also has the ability to create micro and macro cells with dual 5 GHz. You can connect to the further out clients (macro) on a dedicated channel, where you will encounter more re-transmits and slower speeds, all the while your clients closer (micro) transmit on a separate channel with faster speeds. This will lower overall channel utilization and result in faster data rates and equal client airtime. 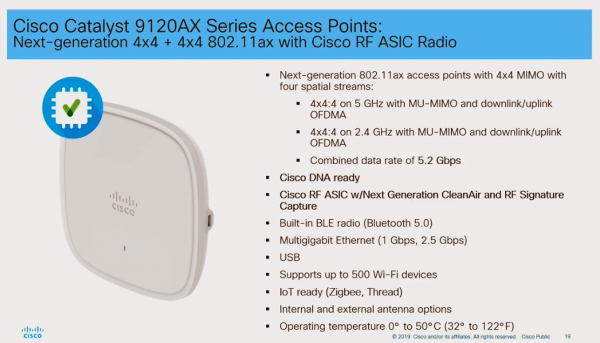 There’s also the Cisco RF ASIC, which is a software-defined radio. This makes the 9120 a very versatile access point.

The ASIC can override the Wi-Fi Chipset DFS (Dynamic Frequency Selection). Let’s say the Wi-Fi chipset detects a DFS event (Radar) and wants to trigger a channel change. The RF ASICS’s spectrum analyzer might look at the entire spectrum and determine the frequency is clear, this is a false positive and override the chipset to stay on that channel.

Lastly, and this is pretty impressive – every radio signal has a unique fingerprint (its oscillator takes a moment to start, transmitter delay and so on). Now with the RF ASIC, it can determine that this is Fred’s iPhone and not John’s. With hyperlocation, I can create a profile of a specific client as it roams from AP to AP in my network. Tie this in with Cisco ISE and DNA Center and you have a very powerful system. The automation possibilities alone are endless! (Full disclosure here, some features are coming and have not yet been released). 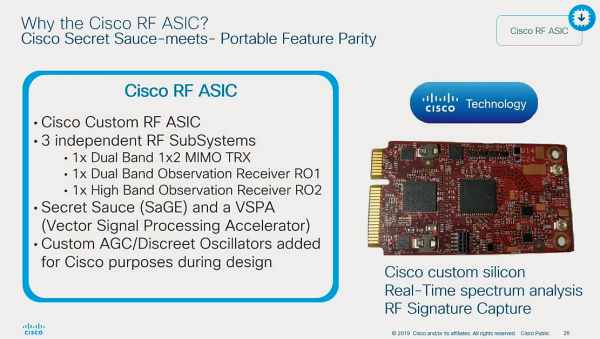 In conclusion, I think they are many things to be excited about Wi-Fi 6. Its main focus is on efficiency, not maximal throughput, addressing growing issues with more and more clients on a shared medium. To speak in an analogy from earlier, I’m looking forward to getting some lanes added to the road, so when there is a crash, we don’t all have to come to a full stop.

Nico Stein is a AVP of IT at Signal Financial FCU, a Maryland based Credit Union with branches in MD, VA and DC. Originally started with IBM Germany, he has over 15 years of IT experiences, managing campus networks and critical systems. He has a passion for all things virtualized and tends to get excited about an ICMP echo reply. Nico holds a CNNA and numerous Microsoft certifications. You can follow Nico on Twitter @nicostein or on his blog https://nicostein.com/