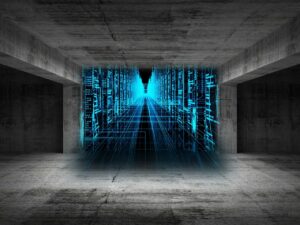 The Edge is hot these days. It’s right up there with AI/ML and blockchain when it comes to hype. And just like other popular concepts like Cloud and SDN, Edge means different things to different people.

In this post, we’ll quickly review why the edge has captivated our attention, what that means for networking, and then take a deep dive into VMware’s vision for the network edge. By the end, I hope you’ll have a solid understanding of the need for SD-WAN as well as what’s next in this space.

When most people talk about ‘the edge,’ they are referring to edge computing.

According to Wikipedia; edge computing is a distributed computing paradigm which brings computation and data storage closer to the location where it is needed, to improve response times and save bandwidth.

Essentially, as we increase the number of connected devices (especially mobile and IoT), the amount of data generated by these devices (think 1080p video streams from security cameras), the amount of data consumed by these devices (e.g. providing augmented reality or watching streaming video), and the proliferation of SaaS applications for every aspect of our work and personal lives (like UCaaS or a digital workspace platform à la Workspace One) we are forced to pay closer attention to bandwidth and latency requirements.

An obvious solution to these increasing demands is to move compute and storage closer to the users. And that, of course, is the primary driver behind edge computing.

I’m sure you noticed that our description of edge computing is heavily dependent on some fundamental aspects of networking, namely bandwidth/throughput and latency but also jitter and packet loss. In fact, the correlation goes deeper than that. The location of the edge is defined by the network. In other words, when we say ‘edge computing’ we are talking specifically about compute and storage at the edge of the network.

So let’s look at the modern enterprise network and see what we can learn about the modern network edge. First off, in many ways, the definition of the edge is shifting. In the past, we typically connected our campus, branch, and data center locations with a managed WAN network, feeding all traffic through the data center and then out to the internet. In many ways, this created a single edge – at the data center, protected by a stack of physical appliances. But now that we’ve shifted so much of our IT infrastructure to SaaS and IaaS/PaaS cloud offerings, every location, and indeed even individual users on the move, need to connect directly over the internet. This shift is what is driving SD-WAN adoption. It also creates a whole new network edge paradigm.

When you move from a data center-centric architecture with a private managed WAN to a cloud-centric architecture with a software-defined WAN built as an overlay across any physical underlay (including MPLS, LTE, Wi-Fi, DIA, and broadband), you create a lot of new edges. Each branch is an edge. Each cloud is an edge. Potentially each user and application could become their own edges. This creates a need for more network and security intelligence at all these new edges. And it’s leading to concepts like Universal Customer Premises Equipment (uCPE) and Network Function Virtualization (NFV) becoming more prolific.

Lucky for us, we don’t have to navigate this changing landscape on our own. VMware has a vision for this new network edge, one that aims to create the essential, ubiquitous digital foundation our enterprises need to stay ahead in this new world of clouds and edges. 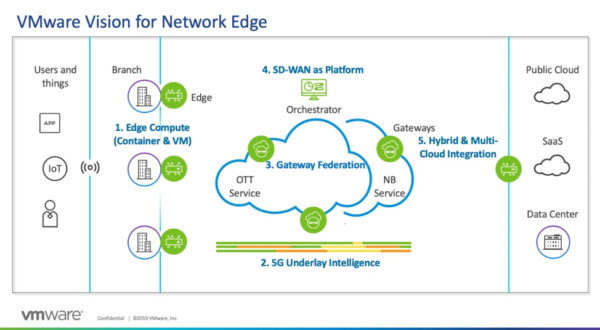 Reading the above diagram from left to right, we see our users and devices, which are connected at our various branch or campus locations. Each of these sites has an edge facing the internet and other transport networks in the middle – each of which has edges with each other. Finally, we see our various clouds and/or traditional data centers on the far right – each one again having an edge.

You’ll also notice that VMware has identified five key areas that they see as critical in taking us beyond “just” SD-WAN into a fully functional network edge platform. They are numbered one through five in the diagram, so let’s walk through them one by one for a bit more color.

Number one above is labeled edge compute. But I like to think of this a bit more broadly in terms of the branch edge. This is where the VMware SD-WAN Edge lives, to provide secure connectivity, recognize and steer applications, and perform QoS. Today these VMware SD-WAN Edges are available as a hardware appliance, or as a virtual appliance, which is another way to say a virtual network function (VNF). That VeloCloud VNF could, of course, live on a uCPE device, or any available edge computing NFV platform.

In the future, we’ll be pushing this edge further into the branch. Leveraging the local LAN/WLAN to reach those users and devices on the far left of the diagram. This is an area where VMware has a distinct and obvious advantage over other SD-WAN vendors. As they bring their heritage of using software to virtualize compute and storage in the data center out to the compute and device edge and combine it with their network edge platform (VeloCloud), the sky is the limit.

The second area highlighted above is all about 5G. I’m calling this the virtualization edge because it is really speaking to the interaction between the virtual network overlay created and managed through VMware SD-WAN by VeloCloud and the coming 5G underlay network provided by a wireless carrier/telco.

Obviously VeloCloud is constantly monitoring and managing that encrypted overlay. And today, it does that despite having very little, if any, direct visibility or control over the underlay networks it runs over. But 5G promises to change that by providing on-demand control, allowing you to program network slices to your specifications. You can imagine the possibilities of having your SD-WAN working actively with the underlying infrastructure to provide the precise quality of experience (QoE) you require.

Telco edge is the overarching theme around number three, gateway federation, because this one is all about interconnecting over the top (OTT) overlay services with network-based (NB) telco-offered services.

Today you can use this to extend your telco provided VMware SD-WAN by VeloCloud beyond the reach of that particular telco cloud by federating their gateways with other VeloCloud gateways (last I checked they had around 800 of them). The next step is to allow network service providers to interconnect directly by federating with each other to provide extended coverage areas.

You probably already know that VMware has partnered with top security vendors to provide their services as VNFs on the VeloCloud platform. What you may not know is that they are constantly expanding the services available on the platform in areas such as analytics and unified communications.

Last but certainly not least on the diagram above is hybrid and multi-cloud integration, coming in at number five but arguably one of the most important differentiators for VeloCloud. This is where those VMware SD-WAN Gateways play. They provide an edge between your network and various cloud and network providers’ infrastructure.

As we all accept our hybrid cloud / multi-cloud reality, this functionality continues to become more important. Just as critical are the partnerships that VMware has with the major cloud players. Those relationships, along with the technology behind the VMware SD-WAN Gateways, allow you to provide secure end-to-end connections steered by universal business policy.

Networking on the Edge

While the shifting landscape of the network edge is a topic far too large to be covered in a single blog post, I hope you gained some perspective on why the edge matters, how SD-WAN is helping, and what the near future of networking on the edge has to offer.