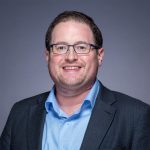 We are excited to have a new delegate at Networking Field Day 28: Jordan Villarreal! Jordan is a  Network engineer with 20+ years of experience across multiple industries. You can see more of Jordan on his Twitter at or on the Tech Field Day Website. Jordan took some time to tell us a little more about himself – here is what he had to say!

Mostly by chance. My Grandfather worked for Indiana Bell and that somewhat naturally meant there was more technology in the house than in your average house in the mid 80’s. I started tinkering with what he’d bring home, enjoyed it, and would tinker more. Since two of those bits of technology were computers, it just ended up being a natural progression from there.

Historically I’ve been a network engineer. I started down that path 22 years ago. My job now is to keep that understanding sharp, learn from how other engineers work and do their jobs, and assemble that in ways where we can educate each other to help on how work will be done next. Very heavily in the automation side.

There is not one path forward to “automation”, nor does “automation” mean the same thing to every person, team, department, or organization. It’s very difficult to understand all the ways you can step through into automation. The tooling, the applications, the methodology. Trying to wrap my head around as many of those as possible, is difficult.

Increased automation. There is such a want for people to “do more with less” that this is going to be a very natural progression. We’re going to see knowledge increase, tooling become more refined, and hopefully more people adopting automation in some manner.

It was either a Commodore 64 or an Olivetti M24/AT&T 6300. I remember having both of them when I was 5, but don’t recall which we had first. Neither were really “great” but being able to really touch technology, and do something with it, was really special. Today I’m pretty simple. Give me a MacBook Air M1 and then I’ll SSH into what I need from there.

Deliberately and transparently. I’ve found that when I’m direct and explicit with those that I interact with, it makes it easier to set up barriers for when I’ll be responding to things, or when I’ll be taking some time away after work eats into my personal time more than normal.

Probably something with the CIA.

I tinker and learn more about technology. When I need to step away from technology it’s usually for doing something offline with my family. I’ll occasionally try to fit some golf in there. Maybe I’ll even get good at it one day.

It’s broad, but I’m looking to see what vendors are doing new today and what they’re planning on doing next.

Adapting my long developed personal engineering tool kit in a way that has less to do with implementing and more to do with advocating for and advancing engineer interests.

Broadly, educators. People who gives up something from themselves to help others gain more for themselves are truly amazing.

What super hero movie character would you like to be and why?

Cypher. He’s not as popular as Iron Man or Super Man, but the one ability he has, that I would absolutely love, is the ability to understand any language, written or spoken. It would be amazing to have zero communication barriers between me and literally anyone else.

Learning more about technology. I love expanding my knowledge and understanding.

Get better at golf and travel more. Possibly combine the two at the same time. Thanks for sharing, Jordan! Be sure to see Jordan as a delegate at Networking Field Day 28 May 4-6, 2022!